Anne Curtis, Manny Pacquiao want you to ‘call them maybe’ 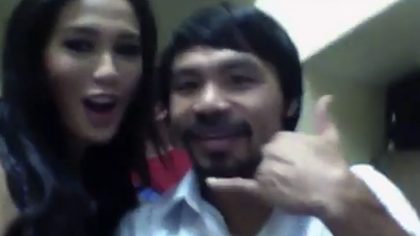 MANILA, Philippines- Celebrities are humans too–they laugh, they cry, and sometimes, they like shooting “covers” of pop songs.

Here’s Rappler’s adorable find of the day: a “music video” of a real-life celebrity barkada lip dubbing, dancing, and gyrating to the song “Call Me Maybe.” In the video, Georgina Wilson, Solenn Heussaff, Liz Uy, Anne Curtis, Isabelle Daza, Raymond Gutierrez, Erwan Heussaff, Borgy Manotoc, Adrian Semblat and friends let loose and goof around in different places. Rappler spoke to the A-list celebs behind the shoot and they tell us they shot 3 versions of the video in between photoshoots and during random days when they would hang out together as a group, they told Rappler.

The idea came after they saw Justin Bieber’s “cover” of the song. During their spare time, they shot and edited an “it’s more fun in the Philippines” spin to the meme, taking from the Department of Tourism’s slogan.

The original video, uploaded on Monday (May 21) spread across social media by Tuesday evening, but was set to “private” immediately after. It was officially released by group members via Twitter on Tuesday morning (May 23) and as of posting already has 4000 views (Updated: As of May 24, one day since its official release the video has more than 300,000 views).

A meme is born

The music video is only one of many on the popular video-sharing site YouTube. A few weeks ago, a video of the Harvard baseball team singing the same song went viral 10 days after it was first uploaded. The meme began in February this year after a “cover video” of the song featuring Justin Beiber, Selena Gomez, and Ashley Tisdale became viral. The video currently has more than 39 million views.

Carly Rae Jepsen’s song has also given birth to another trend–calling cards that bear the lyrics of the song.

Do you have your own version of the popular video meme? Send them our way and we’ll feature the best ones on the website. Leave us a comment on Facebook or tag us on Twitter (@rapplerdotcom). -Rappler.com

For more on local celebrities, click on the links below.