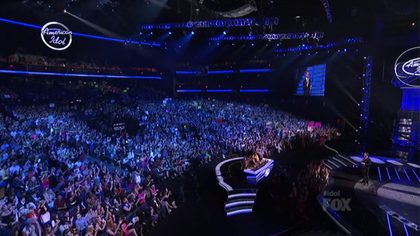 MANILA, Philippines – A star-studded show will close the 11th season of the television megahit “American Idol” on Wednesday, May 23 (Thursday, May 24 in Manila)

The two-hour finale, where either Jessica Sanchez or Phillip Phillips will be crowned as the competition’s winner, will go live from the Nokia Theater LA Live in Los Angeles.

The Hollywood Reporter (THR) reported Tuesday, May 22 (Wednesday, May 23) that the show will feature tributes to disco diva Donna Summer and the Bee Gees’ Robin Gibb, both of whom recently passed away.

Disco legends Gloria Gaynor, Thelma Houston, and Gladys Knight will perform the Summer tribute along with the female finalists, as well as Nelly Furtado, Sheila E., and Jennifer Holliday. Meanwhile, the male finalists will pay tribute to the former Bee Gees member in special number.

Other guest stars slated for the grand finale are Puerto Rican reggaeton stars Wisin Y Yandel (who will perform with judge Jennifer Lopez); pop superstar Rihanna; Aerosmith (who will perform for the first time on “Idol” with their frontman, judge Steven Tyler); Neil Diamond (who will sing with the male finalists); and Broadway and TV star Kristin Chenoweth (who will sing a duet with Sanchez).

The season finale will be broadcast live on the FOX television network in the United States, and will also be aired live in dozens of countries around the world.

In the Philippines, Star World and ETC will both air the finale live at 8 am Thursday. For those who don’t have access to a TV, Rappler will also live blog the finale starting at 7:30am.

The two finalists – Sanchez and Phillips – sang for America’s votes during a one-hour performance night aired Tuesday, May 22 (Wednesday, May 23 in Manila). – Rappler.com

Click on the links below for more of the American Idol finale.