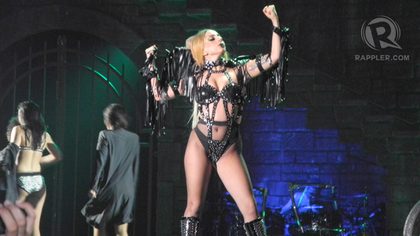 JAKARTA, Indonesia [2nd UPDATE] – Pop diva Lady Gaga on Sunday, May 27, cancelled her Indonesian concert with promoters saying the security threat was too serious after Islamic hardliners promised “chaos” if she entered the Muslim nation.

The promoters had indicated that a deal was being hammered out to tone down the June 3 concert in Jakarta, but the US star’s management stood firm, vowing there would be no compromise to appease religious conservatives.

“We had to cancel the concert in Indonesia,” Lady Gaga confirmed on Twitter, where she has nearly 25 million followers, more than anyone else on the social networking site.

“I’m so very sorry to the fans & just as devastated as you if not more. You are everything to me.”

The flamboyant performer, known for her outrageous outfits and wigs, had been bombarded with Twitter pleas to reconsider after Minola Sebayang, lawyer for promoters Big Daddy, told reporters Lady Gaga would not be coming.

“Lady Gaga’s management has considered the situation minute to minute, and with threats if the concert goes ahead, Lady Gaga’s side is calling off the concert,” said Sebayang.

“This is not only about Lady Gaga’s security, but extends to those who will be watching her.”

Earlier this month Jakarta police refused approval for the show after the hardline Islamic Defenders Front threatened violence if Lady Gaga performed, calling her a “devil’s messenger” who wears only a “bra and panties” on stage.

Big Daddy president director Michael Rusli said it was “unfortunate” that the show, part of Lady Gaga’s tour of Asia that drew protests from Christian groups at her shows in the Philippines and South Korea, would not tone down any of her concerts.

“For the past few days we have communicated with the government and Lady Gaga’s side. The government has given support, but this is not about the permit,” he said. “The cancellation is really due to concerns over security.”

More than 50,000 tickets had been sold for the event at the Bung Karno Stadium, but FPI Jakarta chairman Habib Salim Alatas said the cancellation was “good news” for Muslims in Indonesia.

“FPI is grateful that she has decided not to come. Indonesians will be protected from sin brought about by this Mother Monster, the destroyer of morals,” he told AFP.

“Lady Gaga fans, stop complaining. Repent and stop worshipping the devil. Do you want your lives taken away by God as infidels?”

The FPI claims 7 million followers and has been known to raid pubs and clubs.

“I strongly believe this cancellation will benefit the country. Indonesians need entertainment and art which have moral values,” he told reporters.

Lady Gaga is scheduled to play 3 shows in Singapore this week. She was due to play in Jakarta after that, before flying to New Zealand and Australia, and then to Europe on her “Born This Way Ball” tour.

Indonesian fans had suggested that Big Daddy look for another venue outside the capital after Jakarta police refused to give approval, but Rusli said “this is a huge concert so it can’t be moved elsewhere”.

“Nowhere else in Indonesia can accommodate that many people”, he said, insisting that the 26-year-old singer was “prepared to adapt to Asian culture”.

Disappointed student Agus Murdadi, 17, said he had been waiting for months to see his idol.

“I’m shocked. She’s creative, not provocative. I bought a ticket because I want to see her dancing and singing ‘Judas’ in front of me,” he told AFP.

“I’m going to tweet to her to tell her that she should just come and not worry. The police can take care of FPI. I hate the FPI.”

To the thousands of fans — known as “lookittle monsters” — who begged her on Twitter to come to Indonesia, Lady Gaga replied: “I will try to put together something special for you.

“My love for Indonesia has only grown. #GagaSendsLoveToJakarta and all its people.”

About 90% of Indonesia’s 240 million people identify themselves as Muslim, making it the world’s largest Islamic-majority nation, but the vast majority practice a moderate form of the religion.

In the past, pop stars including Beyonce and The Pussycat Dolls have been allowed to perform in the country on condition they wore more conservative dress than usual.

At her concert in Manila, Lady Gaga spoke out against her local critics, declaring she was “not a creature of your government” before belting out her controversial song “Judas.” – Agence France-Presse

About 90% of Indonesia’s 240 million people identify themselves as Muslim, making it the world’s largest Islamic-majority nation.

In the past, pop stars including Beyonce and the Pussycat Dolls have been allowed to perform in the country on condition they wore more conservative dress than usual.

Lady Gaga is scheduled to play three shows in Singapore this week. She was due to play in Jakarta after that, before flying to New Zealand and Australia, and then to Europe. – Agence France-Presse