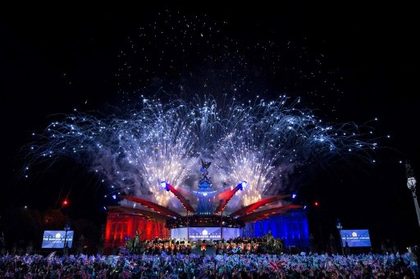 LONDON, United Kingdom – Queen Elizabeth II smiled as she took her place for a star-studded diamond jubilee concert Monday in front of Buckingham Palace, despite her husband’s sudden hospitalization.

The 86-year-old sovereign, wearing a black cape with gold buttons, drew a huge cheer as she arrived for the second half of the concert.

She was escorted into the royal box by her son and heir Prince Charles as her consort Prince Philip was earlier taken to hospital as a precautionary measure with a bladder infection.

He is to miss the rest of the jubilee celebrations marking her 60 years on the throne.

The monarch waved to the crowds as she took her seat.

The concert, in warm evening sunshine, kicked off with fireworks and an energetic performance from Robbie Williams that got the crowds rocking.

After an opening salvo of pyrotechnics and music from a military band, resplendent in their scarlet tunics and bearskin hats, Williams jumped out from behind to join them for a high-octane rendition of his song “Let Me Entertain You”.

The concert, put together by Take That star Gary Barlow and staged on the Queen Victoria Memorial in front of Buckingham Palace, was being watched by more than 10,000 lucky ticket holders in temporary stands, and tens of thousands more on The Mall.

The ceremonial route to the palace was a sea of Union Jack flags, with people enjoying the gig on giant screens.

Senior members of the royal family were in the stands, including Prince William, his wife Catherine and brother Prince Harry. Prime Minister David Cameron and Anglican leader Rowan Williams, the Archbishop of Canterbury, were also in the royal box.

Brian May, who kicked off the 2002 Golden Jubilee pop concert by performing “God Save the Queen” on the palace roof, was also in the stands.

After Williams returned to open the second half, the next performance was “Sing” — specially written by Barlow and Andrew Lloyd Webber and featuring artists from across the Commonwealth. Following a crowd wave from the back of The Mall to the front, Welsh diva Shirley Bassey performed “Diamonds are Forever”, before Australian star Kylie Minogue took to the stage.

“Your Majesty, congratulations on an incredible achievement,” he said.

Comedian Jimmy Carr, compering, told the crowd: “She’s been working tirelessly for 60 years. Even now her work schedule would put any of us to shame.

“I think there’s a lesson here for all of us: you’ve got to plan for your retirement.

“She’s 86 and she’s had to rent out her front drive to Gary Barlow to put on a concert.”

Earlier, after Williams got the party started, Grace Jones, 64, performed “Slave to the Rhythm” in a sultry plastic outfit and kept a hula hoop going throughout.

She ended her performance by bellowing: “We love you! Happy birthday, our queen.”

Cliff Richard, 71, who has had hits throughout the queen’s reign, performed a medley of his songs, while Tom Jones rounded off the first half with a Latin-themed version of “Delilah”.

Beatles star Paul McCartney, who is on the concert bill, paid tribute to the queen’s years of service.

“Sixty years of Her Majesty’s reign, and we’re all here having a party and people all over Britain and all over the world are celebrating this woman,” the knight told the BBC.

“She’s only one woman after all, but what a great woman, what a fantastic job she’s done.”

Out on The Mall, Pauline Copus and a group of 20 family members were having a miniature street party, complete with a table, tablecloth, jugs of Pimm’s and “coronation cakes”.

They had attended all the weekend’s celebrations, including the Epsom Derby races on Saturday and Sunday’s river pageant.

“They do so much for our country. And the atmosphere’s amazing — every time we come to something like this there’s this big buzz. You can’t describe it.” – Agence France-Presse