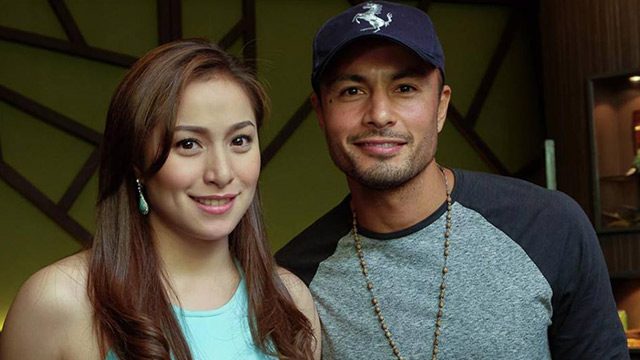 Facebook Twitter Copy URL
Copied
Derek talks about his preferred roles, Cristine on a new guy in her life, and the actors dish on the new 'Trophy Wife' movie

MANILA, Philippines – Actor Derek Ramsay says that despite the awkwardness, he and actress Cristine Reyes were professional while making the movie The Trophy Wife together.

The two were previously an item, but are no longer dating.

“We’re both professionals and we’re both good friends. Had we not been friends, it could have been difficult, but it made it a lot easier for us to work smoothly,” Derek said during a recent screening of the movie.

In the film, Cristine plays Lani, a woman who got caught in a whirlwind romance with a rich playboy named Chino, played by Derek. Eventually Lani marries Chino’s brother Sammy, played by John Estrada.

The film, one year in the making, was directed by Andoy Ranay and aims to present a unique retelling of a woman’s pursuit of her brand of happiness. The movie also stars Heart Evangelista, who plays Derek’s girlfriend.

Cristine has expressed her intention of being discerning in choosing more decent roles that will not compromise her faith,

“It is a personal decision and I don’t want people to view me being a Christian and I am doing such roles or scenes in the future. I need to be choosy at this time,” she said.

She also said that she is dating someone. “He’s a Persian but he grew up here,” said Cristine.

In order to be effective as Lani, she made the effort to constantly consult and collaborate with Keiko Aquino, the writer, and Andoy, the director.

Derek also said that he likes dark roles. “I like John’s role better than mine. The movie, it’s the story that stands out. It’s not any of our characters.”

Derek also stressed that he doesn’t just consider himself another sexy actor.

“At the end of the day, when I pick projects, I am not doing it because I want to win best actor. I am a team player so I give what I can to make a project work. If there’s a best actor, that’s a bonus. I want to be remembered as a good actor and not just the guy who takes off his shirt.”

The Trophy Wife is now showing in cinemas.– Rappler.com

Photo by Ted Claudio of WazzupPhilippines.com