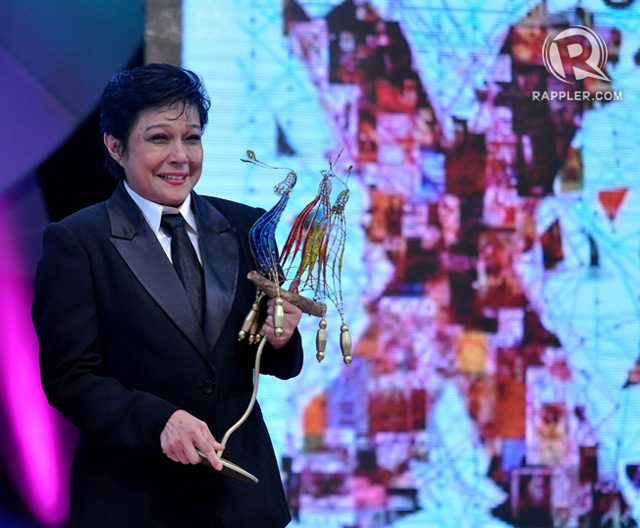 Facebook Twitter Copy URL
Copied
The actress thanked fans and supporters, promising that she will continue to make films as long as there's an audience
MANILA, Philippines – Actress Nora Aunor won the Best Actress Award in the Director’s Showcase for Hustisya on Sunday, August 10 at  the Cinemalaya Awards Night  at the Cultural Center of the Philippines. Her win was met with cheers and a standing ovation from fans and supporters.

Aunor, known as the Superstar or Ate Guy in the entertainment industry thanked her fans during her speech.

(If were not for them, I would not be here in front of all of you.)

She also expressed her appreciation to the cast and crew of the movie as well as the people behind Cinemalaya.

Aunor also said that she will continue to make films for as long as the audience wants especially for today’s generation.

(As long as you continue to support, I will continue to make meaningful films, especially for today’s youth. I hope it will serve as an inspiration to them, the movies I make.)

Aunor’s win comes only a short time after she was excluded from the list of National Artists, released last June, which was the subject of much controversy.

On July 1, President Benigno Aquino III spoke on the issue, saying the reason the actress was excluded was due to her drug case back in 2005. But Aunor’s lawyer in the US clarified that she was never convicted.

The actress eventually spoke up on the issue, saying that while she was hurt, she is grateful for the continuous support from friends, showbiz colleagues and fans. –Rappler.com