[Movies] ‘Prometheus’ is imperfect yet compelling

MANILA, Philippines – “Fascination” can be a word that would come and go in your head while watching Prometheus, the newest movie from prolific English filmmaker, Ridley Scott.

For starters, the film is fascinating on a visual scale. The shots, as composed by Polish-born cinematographer Dariusz Wolski but with Scott’s obvious input, alternate between panoramic landscapes (mostly of postcard-perfect Iceland) and tight zoom-ins on many of the actors (such as Swedish lead star Noomi Rapace’s distressed face and, at one point, a hand strategically located near her crotch) incite amazement at natural beauty. (Beholding all these at an IMAX screen heightens such imagery exponentially.) Likewise enthralling are the production designs, credited chiefly to Arthur Max, which — while not dishing out as much of a visual overload as, say, Star Wars — can still have fan boys salivating at the prospect of potential action figures of not just the characters but of the hardware, chief among them the movie’s massive, eponymously named spaceship. (That plus the so-called probes, which in the movie are very handy, high-tech devices that are flashlight, mirror ball and homing pigeon rolled into one.)

Such is the enormous amount of Prometheus’ visual detail, to the point of outnumbering actual lines of dialogue, that the screenplay — initially by Jon Spaihts, rewritten by Lost co-writer Damon Lindelof — or even the possible novelization might make for an interesting read, if only to see how all of the movie’s eye candy is put into words.

The film’s tone — ruminative more than expressive, more hypnotic than kinetic — is pretty wondrous as well.

In depicting the majestic eeriness of an isolated, seemingly deserted world far, far away from Earth, and in inciting viewer musings about who in heavens is really responsible for creating mankind, Prometheus is a laudable attempt at brain-rousing speculation. It may come off as a glorified planetarium video, yet it is significant enough to raise existential, gods-vis-à-vis-man questions (thus the film’s mythological title) that, people’s diverse faiths and beliefs notwithstanding, continue to baffle us mortals.

At one point, once mayhem ensues in Prometheus, a provocative suggestion is even implied: that humans could be the only creatures capable of sympathy. Prometheus is also fascinating in a less-flattering, what-gives sense, primarily due to its tack of what I’d like to call “creative recycling.”

This just-out movie not only marks Scott’s first foray into 3D filmmaking, it is also his first new science fiction flick since Blade Runner from 30 years ago.

Yet as Prometheus unfolds, it’s clear that Scott didn’t simply return to the genre that earned him commercial esteem. In a manner of speaking, he practically remade Alien.

While Prometheus is (strictly speaking and “prequel” chatter among netizens aside) not a remake of the big breakout hit for both Scott and actress Sigourney Weaver, several elements from that 1979 pop classic abound in the 74-year-old director’s latest offering.

One, we get a crew of individual personalities who are essentially at the script’s literal, successive disposal.

Two, among the crew members is a hyper-useful android, played here by the universally-admired Michael Fassbender. (The movie’s likening of him in one scene to a young, circa-Lawrence of Arabia Peter O’Toole is amusing and spot-on.)

Three, there are foreboding elements galore: tall, strange non-human creatures, a cave teeming with vases that resemble a vast nest of alien eggs, fluids that are either gooey or acidic and monstrosities that seem to know no language beyond dreaded shrieks. 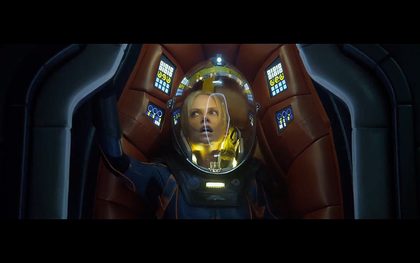 Four, the moments of sci-fi horror are familiar, though, to be fair, not in the by-the-numbers style of, say, Alien Resurrection. (Prometheus’ gore has merited an R-13 MTRCB rating.)

Five, the chief protagonist is likewise a woman, with Rapace doing a good job at being perennially distraught as the tension builds up — a performance that is less like Weaver’s Ellen Ripley and a little more of Lisbeth Salander. (Rapace, who comes off as a tougher dead ringer for French charmer Audrey Tatou, is the original onscreen Girl with the Dragon Tattoo, after all.)

Besides all that, Scott apparently wanted to channel an even more revered film, Stanley Kubrick’s 2001: A Space Odyssey.

This through the presence of an imposing, intriguing object (2001 had that odd monolith, Prometheus has its signature, Stonehenge-like image of a bald human head), a small platoon of space-suited humans exploring unchartered terrain, and the newer movie’s search for the “engineers” who created the human race. (The cryptic, puzzling style of Stanley’s opus, however, is a far cry from the often leaden exchange of “big” thoughts in Scott’s project).

Prometheus is clearly a flawed, not-so-great Scott flick. Yet on hindsight, its good traits outweigh its bummer bits.

I would watch it again myself — not just to see a scantily clad Charlize Theron do hard push-ups, or witness Fassbender deftly depict robotic duplicity, or gaze at the movie’s picturesque magnificence. Rather, it would be swell to bask anew in the movie’s immersive sense of enigma, of how it replicates the scientific mystery of life itself.

Prometheus doesn’t answer the nebulous questions it raises (hello, possible sequel), yet the impressed viewer might still be inclined to say, “Thanks for asking.” – Rappler.com