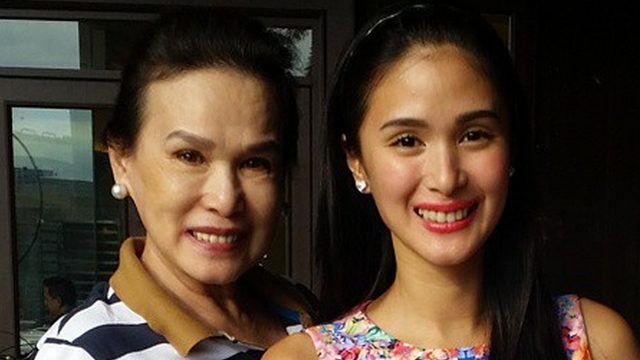 MANILA, Philippines – Actress Heart Evangelista said that the fact that she was getting married really sunk in on Friday, August 29.

“Kagabi medyo nag-sisink na siya  (Last night it was sinking in). First time ko na meet yung mga tao behind the wedding – coordinator, photographer, florist.  So medyo nagsisink in na siya na ikakasal na ako (So it’s sinking a bit that I am getting married). Super exciting pero natatakot kasi (I’m a bit scared) it’s a different stage, a different chapter. But more than anything I am the happiest girl right now,” she said in a live interview on Startalk, Saturday, August 30.

She said that she and fiancé Sen. Chiz Escudero want an intimate and private wedding, with family and close friends. There were no details released about where the wedding will be or the final date, but Heart said February 14, which is Valentine’s Day and her birthday as well, is a possible date.

She also said that she is planning to talk to Sen. Miriam Defensor-Santiago to be part of their wedding. Santiago, who is currently recovering from stage 4 lung cancer was the one who introduced the two of them

On August 23, Escudero formally proposed to the actress in his province of Sorsogon witnessed by family and closest friends.

In an interview with the Inquirer, Escudero said that he has asked President Benigno Aquino III to be his best man.

Prior to the live interview, a taped interview of Heart and Sen. Chiz Escudero was aired on the show.  Asked if her father Rey Ongpauco will walk her down the aisle when she gets married, Heart said they are taking it one step at a time.

(What is important is I talk to him, unlike before, I was lonely because I missed him. Whatever his decision will be, for as long as we are okay.)

She also spoke up about her mother Cecile Ongpauco, whom she recently met up with along with her sister.

“Okay naman shopping, eating . Pero ang laki ng pinagbago niya sa paningin ko. (In my view, I saw a big change in her.) Nag-mellow down siya pati ako (She mellowed down, and so did I). We all learned our lesson, I guess  Pero na- appreciate ko …siyempre ano man iyon, your parents are still your parents. It was very light. Malaki na yung changes natutuwa ako sa changes so one day at a time.”

(But I appreciate it because whatever happens, your parents are still your parents. It was very light. The changes were big and I am happy with it, so one day at a time.)

As for the possibility of a pamanhikan (formal request for the bride’s hand in marriage), Heart said: “With what happened, it is so hard to be especially apart so para sa akin yung  (for me) first step is they gave us the blessing na magpakasal kami (for us to get married.)  May video yung daddy ko sa akin …what is important is that they gave us their blessing. For me that is good enough for now.”

In 2013, her parents in a press conference expressed their disapproval on the relationship, asking Escudero to stay away from Heart. However, Heart refused  and said that she will fight for the relationship.

Asked if there will be changes now that she is getting married, Heart said: “Nothing will change. I will still be me.  I will work as hard as I can. I will enjoy life to the fullest. I will have a second family. Hindi na ako magiging malungkot every Sunday. (I won’t be lonley every Sunday.)

Marriage should not change you. It should make you a better person and it should develop you into the woman that you are really suppose to be, and I am very excited for that.” – Rappler.com