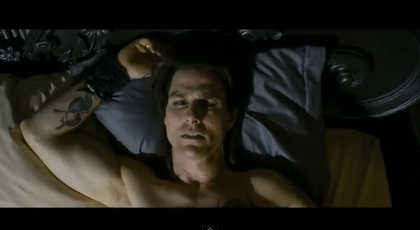 WASHINGTON, United States of America – 30 years ago, a youthful Tom Cruise unleashed his rockstar persona in the movie “Risky Business” — without bottoms.

Today, Cruise is rocking and rolling anew in the movie version of the musical “Rock of Ages” — without a top.

The actor and producer, known for performing his own stunts (and he’s turning 50!), also reveals his talent for singing in the movie, accidentally discovering he has a 4-octave range.

This means he may also be a classical singer if he ever wants to pursue that. For now, though, his accomplishments are enough for him to merit an award that only Douglas Fairbanks, Frank Sinatra and Cary Grant have received in Hollywood history: the Entertainment Icon Award from the Friars Club.

The award was bestowed on Cruise yesterday at the Waldorf-Astroria in Manhattan. According to the Friars Club, the Entertainment Icon award is an opportunity to “pay tribute to someone whose accomplishments transcend the entertainment industry by positively redefining the very culture we live in.”

The Friars Club was established in 1904 for entertainers. It also has a foundation which also serves as its charitable arm. – Rappler.com