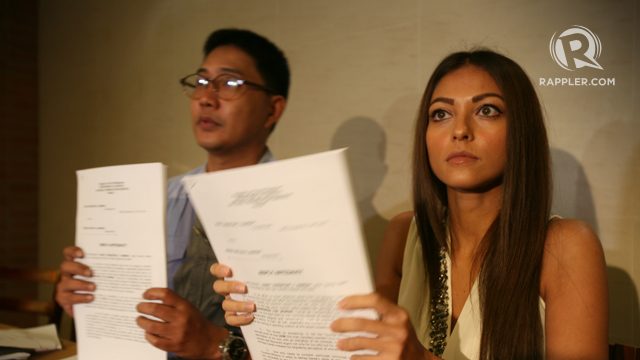 Facebook Twitter Copy URL
Copied
Jolly says she was never into drugs or alcohol, unlike what the actor claims

The Philippine Star reported that Jolly described her estranged husband’s version of the stories as “astounding.”

“Is it not that his base description of his own wife an indication of his mindset, his worldview, his twisted and depraved regard not only for his wife but for women in general? Perhaps Derek mistakes his degrading perception of women as fact,” Jolly said in a copy of her reply-affidavit obtained by the paper.

In her reply-affidavit in her complaint against Ramsay for violation of Republic Act 9262 or the Anti-Violence Against Women and Their Children Act of 2004, Jolly also debunked the actor’s allegations that she was taking illegal drugs which she said is “reversing the story.”

“I was just a young 21-year-old student at that time going out with friends on clean night-outs. On the other hand, Derek, this older 25-year old aspiring model, was in fact the one who introduced me to drugs during the relationship by forcing me to take Ecstasy whenever he would want to have sex,” she said.

Jolly also said that she was not a”groupie” contrary to what was alleged in Ramsay’s affidavit as well as accusations that she had tendencies to be violent.

Meanwhile, the ongoing dispute between Ramsay and Jolly has dragged 3 of the actor’s past girlfriends.

In a report from GMA News, Jolly is now asking the Bureau of Immigration for copies of the travel papers of actresses Solenn Heussaff, Angelica Panganiban, and Cristine Reyes.

Argee Guevarra, Jolly’s lawyer, said that they need the papers to establish the relationship of the 3 women with the actor.

On August 20, Ramsay in a statement confirmed that he was married to Jolly and has a son with her.

Face to face in court

Meanwhile, Ramsay and Jolly also faced each other in a closed door proceeding at the Makati Regional Court on Thursday afternoon with their son present. Both camps agreed to draft an agreement which will include visitation rights, child support, annulment of their marriage and the citizenship of their son.

According to a report from ABS-CBN, Ramsay, who emerged from the meeting after two hours said that hurtful words were thrown at him, but he was happy to see his son.

( I set aside my career when I came in for my son. I did not care about myself. I put my son first.)

Jolly for her part said: “I think we just let out a lot of baggage in the past that needed to be let out before we want to move on and I’m glad that’s resolved.” – Rappler.com