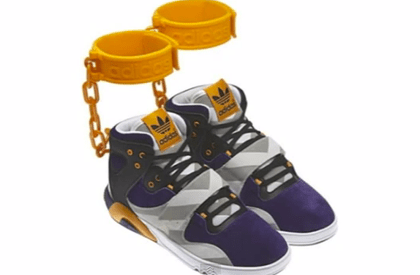 WASHINGTON, United States of America – Designer Jeremy Scott is dubbed “the contemporary Andy Warhol,” what with his quirky, out of the box designs.

One of his works is the movie ticket dress that Katy Perry was spotted wearing at the MTV awards in 2010. Stylists describe the dress as “very Jeremy Scott” and “cute.” The singer also designs for Lady Gaga and Madonna.

It’s no wonder, then, that Scott incorporated rubber shackles into his design for a collaboration with Adidas.

But Americans don’t find it cute this time, saying the shoes are “reminiscent of slavery.”

“Shackles are a symbol of human slavery,” says one critic from the Huffington Post.

It will sell for US$350/pair this August.

Adidas defends the designer. “Any suggestion that this is linked to slavery is untruthful,” they said in a released statement. According to an article from the Huffington Post, Adidas has since canceled plans to release the controversial design.

What do you think about Scott’s design? Would you wear this shoe? Share your thoughts by posting your comments below. – Rappler.com