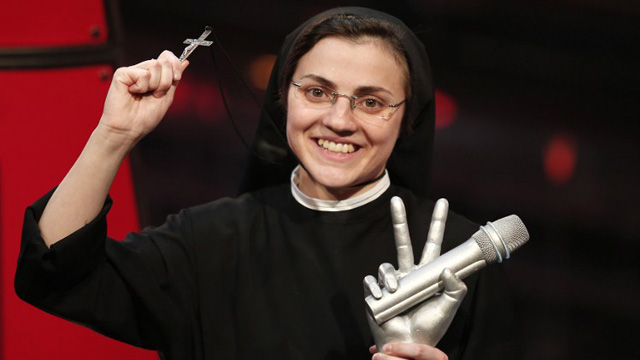 ROME, Italy – Cristina Sciuccia, the singing nun who won Italy’s version of The Voice, on Tuesday, November 11 releases a first album containing an unlikely cover of Madonna’s 1984 hit “Like a Virgin.”

On her way to victory in the television singing contest, the 26-year-old from Sicily became a global Internet sensation with tens of millions clicking on YouTube recordings of her covers of Alicia Keys’s “No One” and Bon Jovi’s “Living on a Prayer.” (READ: WebHits: Nun Cristina Scuccia impresses at The Voice Italy)

Now, despite the misgivings of some Church traditionalists, she is planning to build on that success with the release of a collection of songs entitled Sister Cristina. (READ: Nun sings ‘Girls Just Want to Have Fun’ on ‘The Voice of Italy’)

In an interview with Italian television ahead of the release she insisted her showbiz career would not radically change her life based in a Milan convent, and defended the choice of Madonna’s raunchy single as one of the tracks on the album.

“I looked at the words without thinking of the past: the defining characteristic of Christians is being able to see everything with a new eye,” she said.

In earlier interviews, Sciuccia had said the song struck a chord with her because she felt its account of being “touched for the very first time” was akin to her experience of finding God.

The post was accompanied by a photo-montage of herself in a suggestive pose next to a demure Sciuccia who is sitting in a pensive pose, looking away from the scantily-clad veteran pop star.