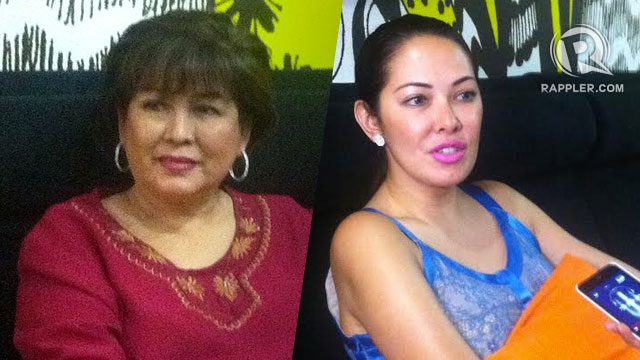 MANILA, Philippines – Actress Ruffa Gutierrez said that her relationship with mom Annabelle Rama is okay, weeks after their Twitter fight.

In an interview with ABS-CBN, Ruffa said she was the one who approached her mom to fix their relationship.

(You know me and mommy, we have a love and hate relationship sometimes. But at end of the day, she is still a mother. The kids…at the end of the day, we should be the ones to swallow our pride and be the first to make amends.)

Ruffa however reminded her mother that she is not a teenager anymore, saying that Annabelle tends to forget that Ruffa herself is a mother with two children, and that if ever she makes a mistake, she will learn from it.

(You know my mom, I’m used to it. It’s nothing new since 2006 what she has been saying up to now. She should use different terms.)

Meanwhile in an interview with Pep, Ruffa confirmed that she and French-Arab businessman Jordan Mouyal are dating.

When asked how her boyfriend felt about the fight between her and Annabelle, Ruffa said: “I’m just so happy that Jordan is very understanding.

“He’s not in the business. So for him, as long as he knows the truth and he knows my feelings towards him, he’s accepting of that.”

In her previous tweets, Annabelle explained that she does not want Ruffa to go through the same painful experience again, after her marriage failed. Ruffa married Turkish businessman Yilmaz Bektas in 2003, but  separated in 2007, after she said he physically abused her.

Their marriage was annulled in 2012. – Rappler.com