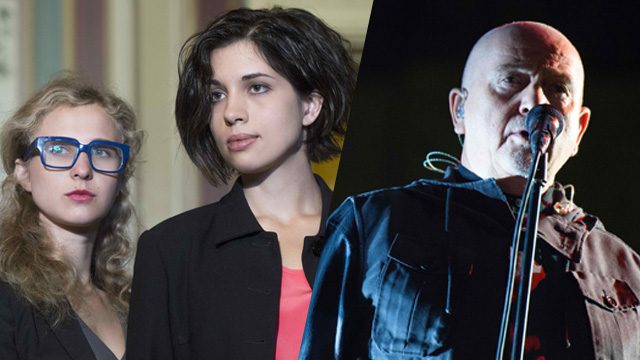 In pictures that started being projected on an outdoor screen in Hong Kong’s Admiralty District on Friday, November 28 the musicians each stand with umbrellas, a symbol of the two-month protests calling for free leadership elections in the semi-autonomous Chinese city.

In one image, Peter Gabriel – the Genesis vocalist turned icon of world music – stands under an umbrella with the caption in English and Chinese, “Water gets everywhere – like the will of the people.”

Another shot features a captionless picture of Pussy Riot wearing masks under umbrellas. Members of the all-female Russian punk band were arrested for staging a protest against President Vladimir Putin in Moscow’s Orthodox cathedral.

“We want to show the faces of some of the people around the world who so admire what these young people are doing,” said Hunter Heaney, founder of The Voice Project, which supports imprisoned artists and campaigned to free Pussy Riot.

“We wanted to show them that we still stand with them and to help counteract propaganda that they don’t have support out there,” he said in a statement.

Protesters want free elections in 2017 for Hong Kong’s leader, whom Beijing says must be vetted through a loyalist committee. – Rappler.com