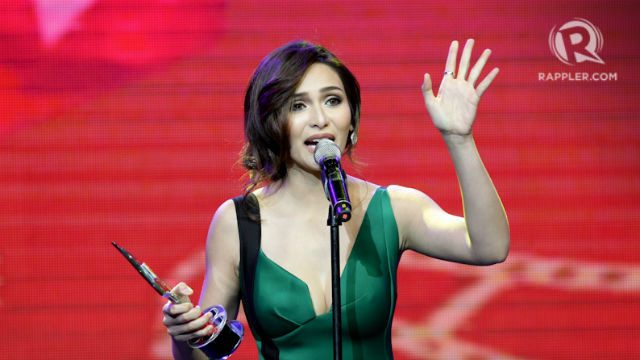 MANILA, Philippines – It was a night to remember for actress Jennylyn Mercado, who accepted the Best Actor award on behalf of English Only, Please co-star Derek Ramsay. Just minutes later, she stood onstage accepting her own Best Actress award, to her great surprise. (READ: FULL LIST: Winners, MMFF 2014 awards night)

(No, really I swear. I did not not expect to receive this kind of award. It’s our first time to make a comedy. It was really surprising.)

(I was not expecting anything. For me, my wish was that after people see our movie, they’d be happy, smiling, and not feeling like they wasted their money.)

Jennylyn also shared that co-star Derek Ramsay was surprised by his win as Best Actor.

(Nothing. We never even talked about it. He was unable to come. So both of us were not expecting. I am here to support my English Only family.)

Jennylyn said she considers the win as a kind of Christmas gift. In her acceptance speech, she thanked those who believed in her as well as her son Alex Jazz for being her inspiration.

See the full line up of MMFF movies here.

Derek later tweeted his appreciation for those who supported the movie, describing the year as a “crazy emotional” one.

This year has been crazy emotional. I went through many trials but with the support of family, friends and faith in god I got through them.

Having the opportunity to be a father to my wonderful son & now winning this award make this one of the best years of my life. Life is good!

Thank you guys for all your tweets. Love ya all

It’s been a tough year for Derek – he and estranged wife Mary Christine Jolly went through a very public battle after she filed a case against him citing the Anti-Violence Against Women and their Children Act as well as a concubinage case, which involved Derek’s ex-girlfriend Angelica Panganiban.

The case has since been settled by both parties, with Derek getting to spend time with his son. – Rappler.com