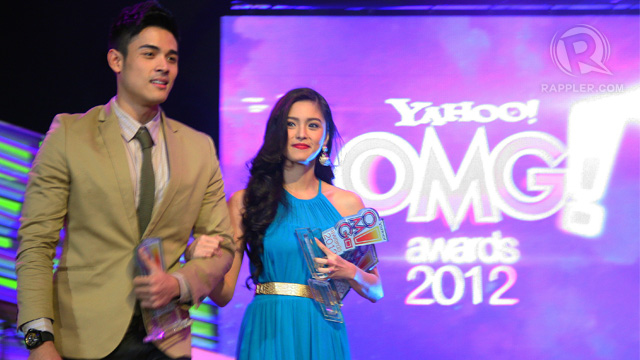 MANILA, Philippines – With online and text votes reaching over 4 million, the winners of the 2012 Yahoo! OMG Awards showered praise on their supporters during their acceptance speeches. Legions of fans gathered at the SM Mall of Asia Arena on the evening of July 6 to pay homage to their celebrity idols. Raymond Gutierrez, Isabelle Daza and Solenn Heussaff hosted. The night was a spectacle filled with elaborate performances and A-list presenters. Celebrities like Richard Gomez, Lucy Torres, Coco Martin, Sam Pinto, Bella Padilla, John Estrada, Kim Chiu and Xian Lim (amongst many others) walked on the purple carpet and interacted with throngs of fans who lined up as early as 4pm. The 16,000-seat arena’s upper box was filled with fan clubs who proudly displayed support for their chosen star. Most notable was the following of recent love-team Kim Chiu and Xian Lim of My Binondo Girl fame; they came in droves for the event. The fan attendance also reflected the results, as Kim Chiu and Xian Lim walked away with 4 major awards: breakthrough male and female, the Loveteam of the Year and — as vindication to their fan base — the best fan club award. It was Coco Martin however, who got the biggest ovation of the night: he received the Best Actor of the Year Award. Attendees all over the arena screamed in delight as he went up the stage.

“Kung wala po kayo, wala po ako dito (Without you, I wouldn’t be here),” Martin said, pointing to his fans. A number of winners and nominees were unable to come to the event because of prior engagements, particularly Angel Locsin, who bagged 3 awards this year as Best Actress, with Phil Younghusband as the It-Couple of the Year, and as part of Unofficially Yours, the Best Movie of the Year.

“Sana po andiyan ako, pero nasa taping po ako ngayon (I wish I was there, but I am taping right now),” Locsin explained in a video. Other winners, such as Male Newcomer Daniel Padilla and Celebrity of the Year Anne Curtis, also delivered their acceptance speeches through video. OMG also paid a touching tribute to the King of Comedy, with a video presentation of his achievements and milestones in the industry. The video was presented by Richard Gomez and John Estrada. A number of noteworthy performances from Solenn Heussaff, Lovi Poe and musical acts Gloc 9, Urbandub and Franco kept the energy high for the night. Gary and Gab Valenciano capped off the evening with their father and son duet, a medley of pop songs that featured energetic dance moves.