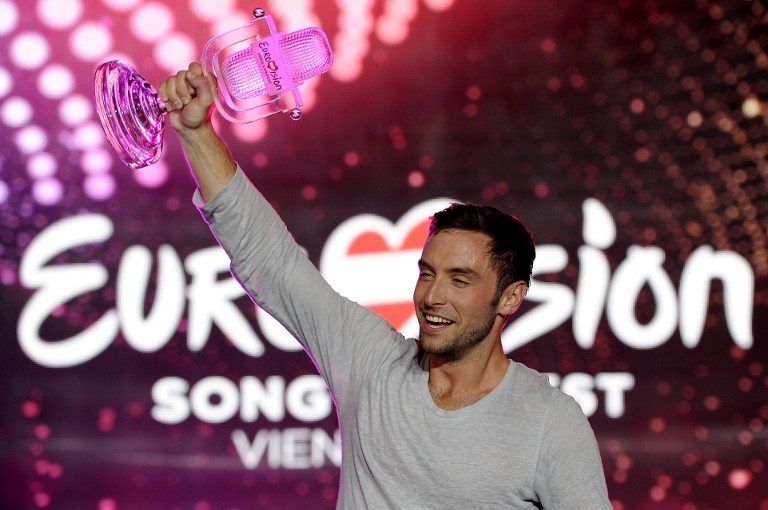 As the scores came through nation by nation via videolink to Vienna, it looked for a while as though Russian Polina Gagarina would take the title with her paean to world peace “A Million Voices”.

In the end though her anthem scored just 303 points. Gagarina did however avoid the boos that Russia’s singer got last year following Moscow’s annexation of Crimea.

“It was absolutely amazing,” 28-year-old Zelmerlow told a packed news conference in Vienna after winning.

“I couldn’t believe it. I really thought either Russia or Italy would win,” he said.

“My feelings right now are all over the place, I am so proud, so full of joy, so excited. Yeah, happy.”

In fourth place among the 27 finalists was Belgian Loic Nottet, followed by Australia’s Guy Sebastian, whose country entered for the first time as a wild card for the 60th anniversary.

“I will continue (to make music),” the German said afterwards, saying she had been “very satisfied” with her performance.

Angell told RTL radio she thought her score was an “injustice”.

Ireland, which failed to make it into the final, still holds the record for the number of Eurovision victories with 7 trophies to its name.

Sweden’s victory means that the contest will be held in Sweden in 2016.

The prospect of the contest being held in Russia had not been relished by the Patriarch of the Russian Orthodox Church, who said Thursday Eurovision promoted values “repulsive to our soul and our culture”.

Geopolitics was present again this year with Armenia’s ballad – described by one magazine as “feeling as long as a Wagner opera” – widely seen as being about 1915 mass killings by Ottoman Turkey. The song came 16th.

Turkey, which refuses to recognize the killings as genocide, has been absent from Eurovision since 2012. Another no-show was Ukraine, cash-strapped from the conflict with Russian-backed rebels in its east.

Mostly though the riotous affair, open to the 56 members of the European Broadcasting Union and a world away from its civilized black-and-white beginnings, is about not taking life too seriously.

It is watched every year by around 200 million people worldwide, including in Australia where it has long enjoyed a cult following. This year it was shown in China for the first time, organizers said.

Previous entries have included six Russian grannies, Ireland’s irreverent Dustin the Turkey and Finnish heavy metal outfit Lordi – looking like orcs from “Lord of the Rings” – who won in 2006 with “Hard Rock Hallelujah”.

The lyrics often make no sense, if they are in any recognized language at all, like “Diggi-Loo Diggi-Ley” by golden-booted Swedish Mormon brothers Herreys in 1984, “La La La” in 1968 or Lulu’s “Boom-Bang-A-Bang” in 1969.

And who can forget the chorus to Austria’s 1977 entry: “Boom boom boomerang, snadderydang. Kangaroo, boogaloo, didgeridoo. Ding dong, sing the song, hear the guitar twang. Kojak, hijack, me and you.”

The event has also long stressed tolerance for the unconventional, as witnessed by Israeli transgender Dana International in 1998, Ukraine’s Verka Serduchka in 2007 and Austria’s Conchita last year.

Her message of openness – she floated gracefully onto the stage at the start of Saturday’s (May 23) show – has been enthusiastically adopted by Viennese authorities, including with special gay-themed traffic lights.

“I like the feeling because it’s a little bit trashy but it’s also very exciting,” said one German fan attending for the first time. “I have loved this show for 15 years and watch it every year on television.” – Simon Sturdee and Ralf Isermann, AFP / Rappler.com