Facebook Twitter Copy URL
Copied
Caveman Minion, Vampire Minion, Egyptian Hula Minion and more! Plus, find out how to preorder all 10 Minions in one go via McDonalds Happy Meals

MANILA, Philippines – Those tiny, frantic yellow creatures, the Minions, conquered the world with a smile, a wave, and their trademark unintelligible chatter as supporting characters in the first Despicable Me (2010).

When they returned in 2013 for Despicable Me 2, they won over more fans and then invaded McDonalds Happy Meals with a vengeance in a merchandising move that had fans scrambling to collect the pocket-sized figures.

And now that they’re starring in their own movie out this July, Rappler can exclusively confirm that the Minions will be back in McDo Happy Meals very soon.

We’ve gotten a sneak peek at our frantic friends; the set of 10 comes in different characters, each with its own unique features. And since the film, a prequel of sorts, chronicles their lives B.G. (before Gru, of Despicable Me fame), the toys reflect Minions in their various states throughout pop culture history, having served masters like the T-Rex, Napoleon, and Dracula.

Here are all 10 Minions toys below: Pushing the little knob at the back makes the closed-mouth Minion reveal his fangs, drawing up his arms to scare you away. We predict this will be one of the most popular Minion toys – winding him up, you’ll be able to watch him a few steps, still holding his banana. Not to be confused with the Guard Minion. Pushing down on top of this gentleman’s head will cause him to move his arms and eyes, looking for an adversary. This Minion comes with a spinning bottom half – which turns really fast with one flick. This Minion comes with a detachable hula hoop. Attaching it to his side and pressing a button on top of its head will make the hoop move faster around him. Movable arms, with a perpetual alarmed expression, holding – what else – a Minion delicacy, the banana.

They used to be better known as a collective wall of yellow capsule-like creatures, but as they grew in popularity, audiences got to know Minions’ different looks (one eye, or two? Tall, or stout?) and personalities.

The new movie focuses on Stuart, Kevin, and Bob, who set out and ultimately land at a villain convention in search of a new master to serve after the Minions unwittingly kill off their previous masters. Here are the designs featuring Stuart (one-eyed, rather mischevious), Kevin (tall, responsible and determined), and Bob (tiny, stout, and the baby of the family). 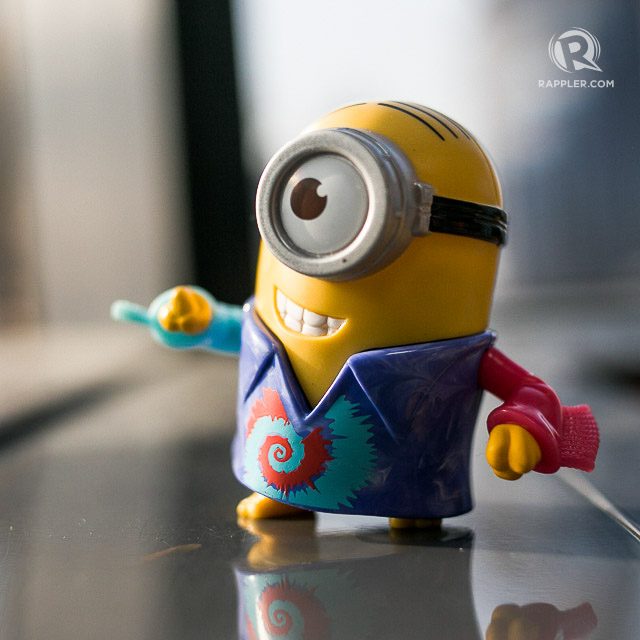 Watch him dance by shuffling his feet from side to side. We all know there’s nothing Minions love more than an impromptu dance party, and Groovy Stuart is no exception. Perhaps to accompany Groovy Stuart, this guitar-strumming version actually sings when you push the guitar just a little bit downwards. We may not be sure exactly what the Minions are saying in their secret language, but this chatty Bob, which talks at the push of a button, is a bona fide cutie.

How to get them early

For those who would like to get all 10 in one go, the preorder option has been made available.

Here’s how, directly from the press release provided by McDonalds Philippines:

NOTE: There is no official word yet on what date one can individually collect the Minions at McDo – check back on Rappler for that information. Readers should also note that this won’t be available in Boracay stores.

Will you be collecting these pocket-sized, chatty BFFs? What do you think of this year’s selection? Let us know in the comments below. – Rappler.com