Paul Soriano’s sweet gesture for Toni Gonzaga after the wedding 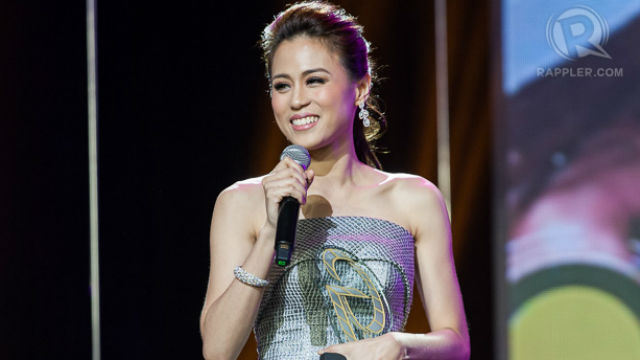 MANILA, Philippines – Newlywed Toni Gonzaga said that she is still getting used to married life, speaking to reporters days after her romantic wedding. (IN PHOTOS: Toni Gonzaga and Paul Soriano marry in beautiful Taytay wedding)

Still, it looks like the longtime couple are most definitely on cloud 9. At the 46th Box Office Entertainment awards held at the Theatre in Solaire Resorts & Casino in Pasay City, Toni talked about how sweet Paul was to her the morning after their wedding.

Toni said she woke up late and that Paul was the one who took care of everything for her.

“Late akong nagising, e. Mas nauna siyang nagising. Wala na akong katabi paggising ko.  (I woke up late. He was the first to get up. I did not have anyone by my side anymore when I woke up.)

“Yun pala, siya ang nagri-ready for everything,” Toni said. (He was already preparing everything)

When asked why he was emotional during their wedding, Paul said he was just happy to be with Toni at last.

“She was beautiful…it was tears of joy,” he said about crying during the wedding.

“It’s a combination of everything…finally after 8 years, I can finally be her number one priority of course after God.”

Of course, Toni’s still adjusting to married life – in particular, missing her family, with whom she’s very close. It’s also well known that Toni’s parents were quite strict with her when she was still unmarried. “Masaya ako siyempre sa bagong chapter ng buhay ko. (I am very happy of course, in this new chapter of my life.)

“But, ayun, exciting kasi nagagawa ko na lahat ng gusto kong gawin. (But it’s exciting because I can do everything I want now.)

Toni also talked about her sister Alex. “Hindi mo maiaalis ‘yon. Sa 31 years ng buhay ko, siya yung roommate ko, e. (You cannot take that away. For 31 years of my life, she was my roommate.)

Toni also said that she and Paul  are set to go to Amanpulo in Palawan for their honeymoon. The trip is a gift from one of their sponsors, Kris Aquino.

“Hindi kasi sila mga beach person. Kahit anong yaya ko na mag-Amanpulo kami, ayaw nila. (They are not beach people. Not matter how many itmes I invite them, they don’t want to go.)

“Kaya sabi ko, kapag nag-asawa ako, pupunta ako dun. Kaya iyon ang gift niya [Kris].” (So I said that when I get married, I will go there. So that was her [Kris’] gift.)

According to Toni, she and Paul are set to fly Monday, June 15 for the trip. She just finished her obligations for Pinoy Big Brother, which will premiere on June 20.

More on Toni and Paul: