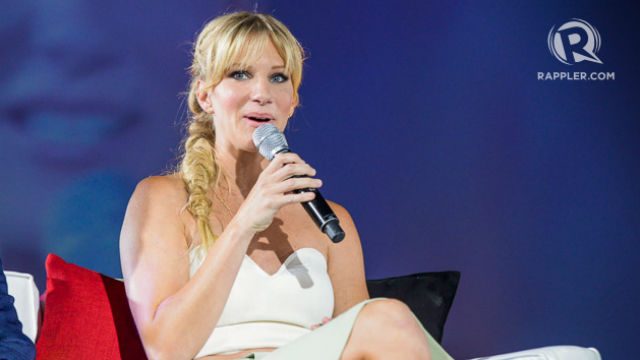 MANILA, Philippines – As Brittany S Pierce, Heather Morris was one of the breakout stars of Glee, with her deadpan delivery and fabulous dance moves.

Heather visited Manila to attend the official launch of streaming service iflix at the Green Sun Hotel Wednesday, June 24 and talked to reporters about life after Glee and her Pinoy fans. (READ: 13 shows Pinoys will be able to binge-watch on iflix)

She’s well aware that Pinoys were among some of Glee‘s most devoted fans. “We have so many fans that contact us on Twitter…and mothers that are ‘I wanna thank you so much for letting my daughter be herself,’ and there are so many people who are so appreciative, it’s so touching to get those messages. You don’t even think about when touching people’s lives.. I feel honored,” she said.

“I think they are just wonderful. They are just so enthusiastic… Their comments are great, they make me laugh,” she said.

Heather has come a long way since she first started out – she previously auditioned on season 2 of So You Think You Can Dance, but didn’t move forward after the first stages. She’s also danced back-up for big stars like Beyonce and Tina Turner. And none of us can forget Brittany’s hilarious one-liners on Glee; she earned that role after impressing in what was supposed to be a small role as an intimidating Cheerio.

Since Glee wrapped, Heather has been focusing on her family. She married Taylor Hubbell this year in a lovely wedding attended by a number of her Glee castmates, and is a mother to son Elijah, born in 2013.

She said that she’s also doing some writing in between.

“I’m working on writing…hopefully we are trying for a new baby soon so baby number 2,” she said, though she didn’t give more details on upcoming projects. From all her experience starting out as a dancer, moving to acting, and now writing, Heather has this advice for fans: “You try to be different as possible – whatever makes you feel comfortable, even if everyone else is not doing it. That’s what I’ve learned in the entertainment industry I guess for the last 10 years.” – Rappler.com