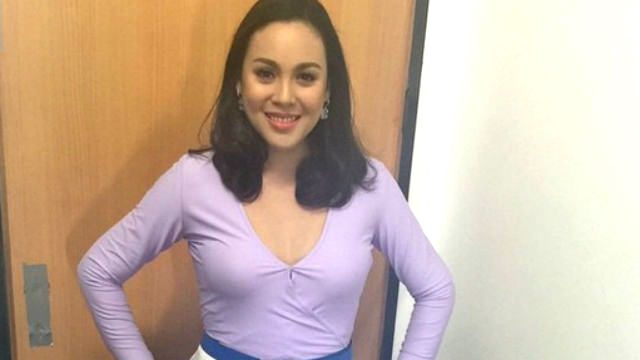 MANILA, Philippines – After taking a break from showbiz and facing some difficult family problems in the past years, actress Claudine Barretto said she is excited to be acting once again. (READ: Julia Barretto on aunt Claudine Barretto’s movie comeback)

In an interview on Aquino and Abunda Tonight Monday, June 29, Claudine clarified that she never really said goodbye to the limelight, but decided at the time to focus on taking care of her children Sabina and Santino following her separation from actor Raymart Santiago.

“It was really a choice. It was a very painful choice…But kasi, kailangan may isang parent talaga na consistent na nandun to cater to all their needs,” she said.

(It’s really necessary that one parent consistently be there to cater to all their needs.)

Claudine said that she is looking forward to doing the movie Etiquette for Mistresses starring Kris Aquino, Kim Chiu, and Iza Calzado. The movie, which will be directed by Chito Roño, serves as her reunion with Kris and the director after doing the movie Sukob in 2006.

According to Claudine, her role in the movie is that of a feisty mistress. Shooting is scheduled to start soon.

On her return to ABS-CBN, Claudine said her relationship with the bosses are okay.

Claudine also shared that she and Raymart are now friends. The two have been locked in a bitter court battle regarding a number of issues, from the custody of their children to domestic violence charges. (READ: Claudine throws RA 9262 at Raymart)

She acknowledged that she and Raymart are repairing their relationship after a meeting with Judge Geraldine Fiel-Macaraig of the Marikina Regional Trial Court, who told them to fix the situation for the sake of their two children.

(And I think what went wrong was the betrayal, the pain inflicted by people who hurt me, including my family.)

Claudine has been estranged from her sisters Gretchen and Marjorie for the past years after her separation from Raymart. Last March, during her niece Julia’s 18th birthday party, Claudine and Marjorie were spotted together, hopefully signaling the beginning of a better relationship between the Barrettos. (READ: Claudine Barretto on Julia, Marjorie, Raymart)  – Rappler.com