MEXICO CITY, Mexico – Anger over US presidential candidate Donald Trump’s remarks about Mexican migrants boiled over Tuesday, June 30 as Mexico dropped out of the pageant and Bogota withdrew its candidacy to host his Miss Universe show.

The real estate tycoon’s comments have incensed Latin Americans and the Hispanic community in the United States since he said on June 16 that migrants were bringing drugs and “rapists” across the border.

Losing both a Latin American contestant and city are big setbacks for Miss Universe as the pageant is hugely popular in the region, where victory is a source of national pride that can spark street celebrations.

“Bogota declines its aspiration to be the host city of the next competition,” the capital’s Tourism District Institute said in a statement.

“The decision was taken after the disrespectful remarks against the Latino and Mexican community of the United States by Donald Trump,” it said, three months after entering the race to host the show.

Colombia’s Paulina Vega won the last Miss Universe pageant and a social media campaign has emerged urging her to give up her crown under the Twitter hashtag #PaulinaRenuncie (#PaulinaResign).

Bogota’s decision came hours after Miss Mexico organizers announced that they would not send a contestant to Miss Universe, which is co-owned by Trump and US entertainment giant NBCUniversal.

“It’s a shame that because of his racist comments we lose what the contest has promoted and represented during so many years, which is an atmosphere of harmony and peace among nations,” former Miss Universe and Nuestra Belleza Mexico pageant director Lupita Jones wrote on Twitter.

On Tuesday, she told Radio Imaginen: “Beyond a beauty contest, a crown, what’s important is to protest in some way to defend the pride and name of all Mexicans.” 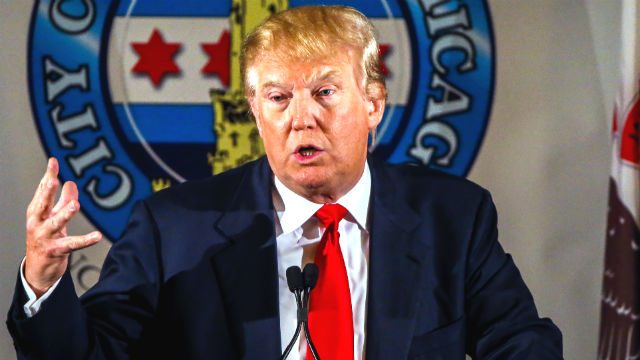 Miss Mexico Wendolly Esparza – a brunette who studied journalism in the United States – said that when she felt that going to Miss Universe would “affect my values and the values of Mexicans, the best decision was not to participate.”

“The biggest crown for Mexico is its dignity,” she told Radio Formula.

Colombian pop star Shakira joined the chorus, writing on Twitter that Trump’s comments were a “hateful and racist” attempt to divide Americans.

This is a hateful and racist speech that attempts to divide a country that for years has promoted diversity and democracy! 1/2

No one living in this century should stand behind so much ignorance. 2/2 http://t.co/jsx0KHdmzO

US broadcaster NBC and Mexican television giant Televisa both announced on Monday that they were severing ties with Trump, meaning they will not air the show.

Trump hit back at Spanish-language US channel Univision on Tuesday, filing a $500 million lawsuit over the company’s decision not to broadcast the July 12 Miss USA pageant.

My just filed lawsuit against Univision. Always fight back when right. #MakeAmericaGreatAgain

Despite the growing criticism, Trump has not stopped talking about Mexico, writing on Twitter on Tuesday: “I love the Mexican people, but Mexico is not our friend. They’re killing us at the border and they’re killing us on jobs and trade.”

The Mexican government has denounced Trump’s remarks as “prejudiced and absurd,” while Venezuelan President Nicolas Maduro called the real estate mogul a “thief.”

Venezuela’s Cisneros Media, the company that organizes the national pageant and airs Miss Universe on Venevision, said it was “evaluating the situation” following Trump’s comments.

Miss Universe is particularly popular in Venezuela, as the country is second to the United States in contest winners with seven. – Yemeli Ortega, AFP/Rappler.com