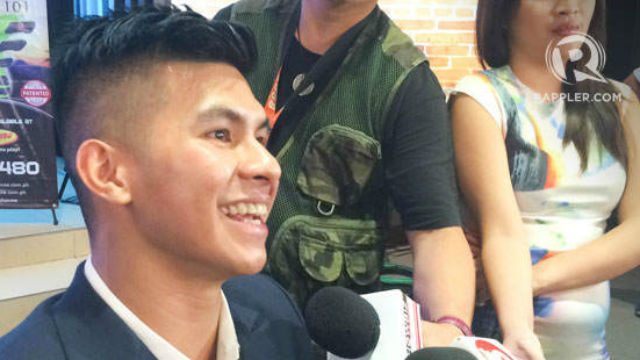 Facebook Twitter Copy URL
Copied
Kiefer, who stars in comedy show ‘No Harm, No Foul,’ addresses rumors that Jasmine was the cause of his breakup with Mika Reyes

MANILA, Philippines – Basketball star Kiefer Ravena said that he is prepared for showbiz intrigues now that he’s part of of a comedy show, and gamely addressed some of them at a recent press conference. (READ: Glory Days)

In an interview with reporters at the event for the upcoming show No Harm, No Foul, Kiefer said he and the other players who are part of the show – Gary David, Willie Miller, and Beau Belga – have prepared themselves for the issues they will face. (READ:Kiefer Ravena, PBA ballers to star in new sitcom) In the sitcom, Kiefer describes his character as a “waterboy turned tricycle driver.” He is paired with TV 5 actress Sophie Albert.

Kiefer said that he really appreciates the hard work people in showbiz put in now that he has seen for himself what goes behind the scenes.

Although he’s now in showbiz, Kiefer said that baskeball is still a priority for him and the guys in the show.

“May limit kami, not just me but the other players as well. Kasi when we started, the PBA was ongoing. Basically as an athlete you can’t be puyat (tired) so sina Direk (Randy Santiago), are very understanding,” he said.

When asked about volleyball player Mika Reyes, Kiefer said that both of them are now focusing on their respective sports. The two dated before taking “a break” sometime in May.

“We’re back to our priorities. I don’t want to put myself in a position to talk about us. It would be best if it comes from her,” he said.

Kiefer also defended actress Jasmine Curtis-Smith, rumored to be the reason for the breakup.

“Jasmine and I are very good friends. We were schoolmates for a year. And it’s nothing more than that.

“There was no third party or anything kasi people will speculate, there was none,” he added.