Facebook Twitter Copy URL
Copied
Sarah G and 'The Voice PH' winner Jason try to win Gift over to Sarah's team – then Bamboo gives it a shot and performs onstage, too

MANILA, Philippines – Jason Dy surprised contestant Mary “Gift” Cerna, along with the rest of The Voice Kids audience, with a performance at the end of the blind audition, which aired Saturday, July 4.

Jason, the champion of the second season of The Voice of the Philippines, sang Sam Smith’s “Stay with Me,” replacing the word “me” with “coach Sarah,” in an attempt to convince Gift to choose Sarah over Bamboo, who was also impressed by Gift’s voice. 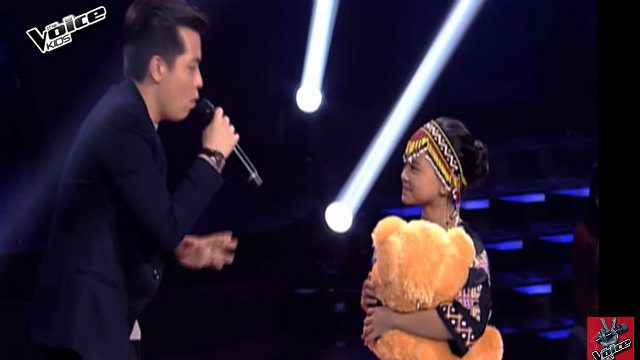 Gift, 10 wore a traditional Manobo dress at her blind audition, in order to represent her tribe. According to her, she comes from Butuan City.

In a last attempt to win Gift to their respective teams, both Sarah and Bamboo also serenaded her. Bamboo even blended in strains of Gift’s audition song, “Malayo Pa Ang Umaga.”

Gift chose coach Sarah over coach Bamboo in the end.

Gift is the latest to join Sarah’s team with another kid, Andrew “Andoy” Patuasi also choosing Sarah over the other judges.– Rappler.com