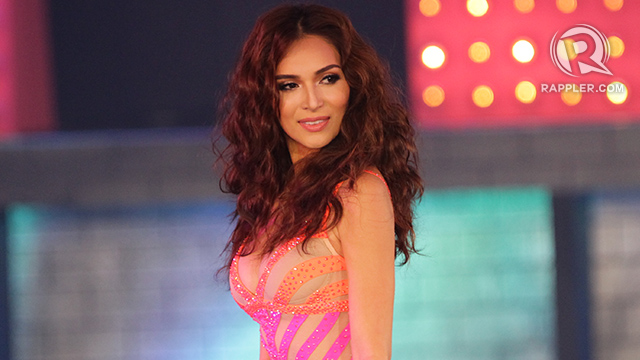 (I was focused on the performance because I was nervous. I was not seeing anything.)

Jennylyn said she is grateful for those who have supported and voted for her to be FHM’s Sexiest woman this year. Actress Marian Rivera held the title in 2014.

(I want to say thank you because there are so many who continue to support and love me.)

Asked if former boyfriend Dennis Trillo texted her good luck, Jennylyn said yes, but he was not the only one who wished her well before the show. The two are working on a new TV project in GMA called My Faithful Husband.

(He [Dennis] was not the only one who texted. Many also sent good luck messages.)

With Jennylyn and Dennis working together again, is she ready for the new intrigues on them?

(I’m used to it, because all of those I’m paired with always end up as my boyfriend, they say.)

Meanwhile, in an interview with Pep, Jennylyn shrugged of the alleged snub of her other co-artists from GMA who did not appear at the FHM event. GMA 7 actresses Andrea Torres, Sam Pinto, Solenn Heussaff, and Max Collins are part of the Top 10.

(I was focused on myself. If they did not go to the event, I guess there is a reason for it.)

(What’s important is I’m here and I was able to entertain those who were expecting me to walk the runway.)

Aside from her soap with Dennis, Jennylyn is currently doing a cooking show and wrapping up two movies – one with Sam Milby entitled The Prenup and an entry to the Metro Manila Film Festival with JM de Guzman. She also won the Best Teleserye Actress award last month during the Pep Awards and was given a special recognition for her role in English Only Please.– Rappler.com