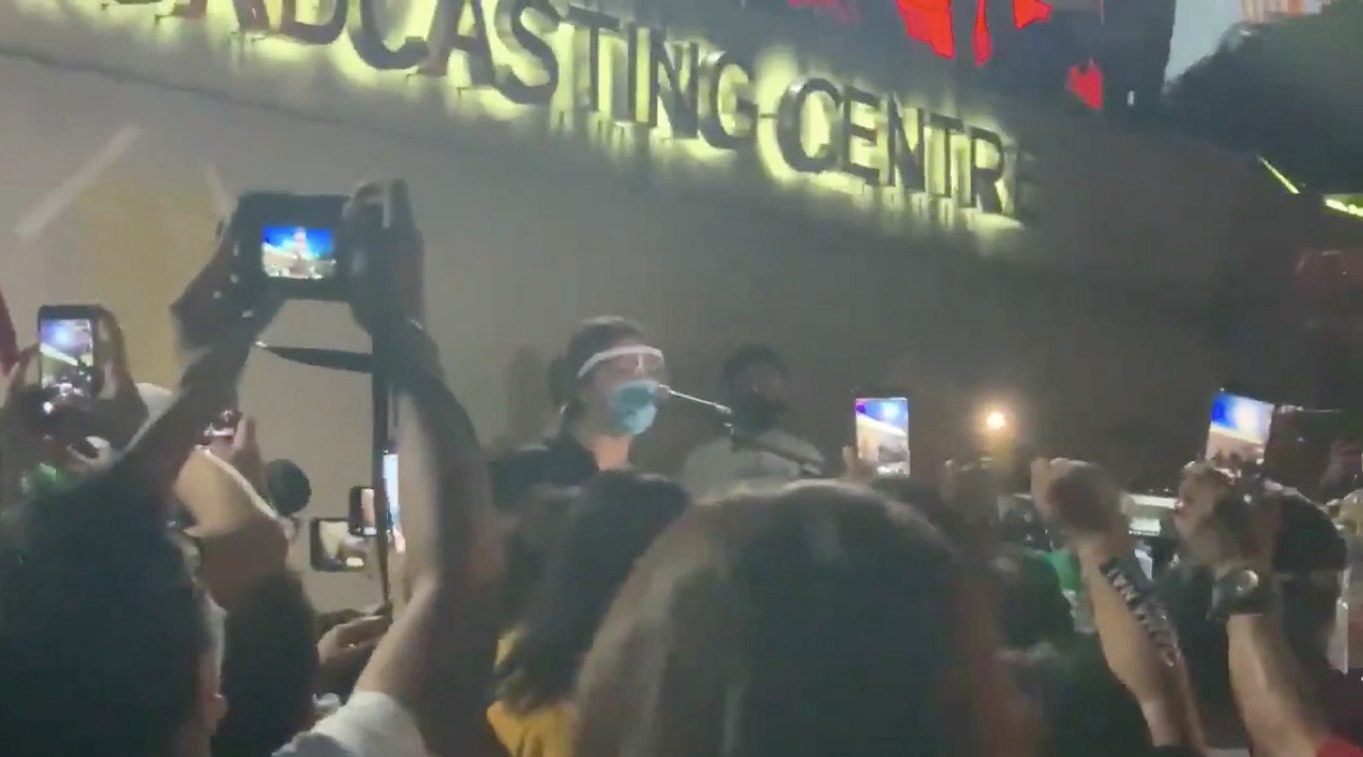 SPEAK UP. Angel Locsin gives a speech at a protest against the shutdown of ABS-CBN.

Angel Locsin urged her fellow celebrities to speak up on the ABS-CBN shutdown, and use their voices to amplify those of their fellow media workers who helped bring them fame.

(Even if you keep posting on Instagram, even if you send sad emojis, you won’t help your fellow workers who are the reason you became famous!)

She told her fellow celebrities to be brave, stressing that now was the time to speak up.

(I understand, us celebrities, we’re expected to stay quiet, to keep our image sweet, to stay neutral so we don’t make enemies. But if we don’t speak up that means we’re on the wrong side.)

Angel also spoke against the 70 lawmakers that voted against the renewal of ABS-CBN’s franchise, saying that it wasn’t the Lopez family that would be affected by the shutdown, but the employees and workers who lost their jobs.

“Akala niyo ba Lopez ang nakalaban niyo? Hindi! Hindi sila mamatay sa gutom! Ang mga simpleng mamamayan ang nagugutom (Do you think that you were attacking the Lopez family? No! They aren’t the ones who will die of hunger. It’s the humble people who will go hungry)!“

She said that the lawmakers betrayed those whom they were supposed to protect.

“‘Yung empleyado na nagttrabaho, na bumoto sa inyo, pero tatanggalan niyo ng kabuhayan, napaka-unfair (the employees that work, that voted for you, you took away their jobs. It’s so unfair)!” she said.

At the protest, Angel stressed her point by carrying a sign that read “Laban ng mayaman, mahirap ang nagdusa (The poor suffer in a rich man’s squabble).”

Angel was among the celebrities who joined the protest against the ABS-CBN shutdown, which included a motorcade that went through several cities before settling at the ABS-CBN compound in Quezon City.

ABS-CBN stopped its free television and radio operations on May 5 to comply with the National Telecommunications Commission’s (NTC) shutdown order, after their congressional franchise expired on May 4.

An overwhelming majority of the House committee on legislative franchises rejected ABS-CBN’s franchise application on July 10.

Without a franchise, the network was forced to implement a retrenchment program, costing the jobs of many of its 11,000 workers. – Rappler.com