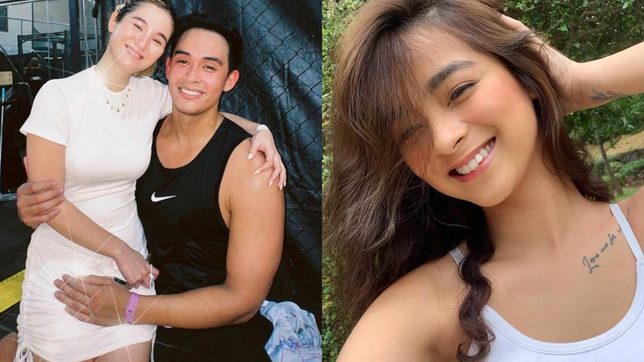 MANILA, Philippines – Barbie Imperial defends boyfriend Diego Loyzaga amid allegations that the actor cheated on her with actress AJ Raval.

(I know Diego…. Every accusation thrown at him, that he’s having an affair, that he visits AJ Raval in Pampanga, none of these are true.)

The celebrity couple became the center of controversy after social media personality Xian Gaza insinuated in a Facebook post that Diego was cheating on Barbie with AJ. Barbie said that she initially wanted to confront Xian but decided not to.

“Noong una [naming marinig ‘yon], gigil na ako, gusto ko hanapin [si Gaza]. Pero pinag-pray ko na lang ‘yung taong ‘yun. Alam ko kasi na iyon ang gusto niyang mangyari, kaya hindi ko ibibigay ‘yon sa kanya (When we first heard about it, I was so mad. I wanted to seek out Gaza. But I just prayed for him instead. I knew this was what he wanted to happen, so I won’t give him that),” Barbie said.

(For me, Diego and I know that we’re not doing anything wrong. We’re happy together. Why would we waste our time on someone who attacks us? At first, it was really stressful. But after my talk with Diego, we decided to not let anyone break us apart.)

Barbie then clarified that the videos of Diego and AJ circulating online were actually taken during their filming of Death of a Girlfriend. She added that it would have been unlikely for her boyfriend to cheat on her because at that time, AJ was still in a relationship with Axel Torres, who also happens to be Barbie’s close friend.

Recalling that she once had some level of friendship with AJ, Barbie expressed her frustration at how the rising actress kept mum about the issue. “Yung about doon kay AJ Raval, for me kasi, ‘di ba, if wala kang kinalaman, or alam mo naman na hindi ka kabit ni Diego, magsalita ka. For me, bakit parang gusto mo na nangyayari ‘to lahat, na nagka-thing kayo ni Diego?”

(The thing about AJ Raval is, for me, if she’s not involved, or if she knows she’s not having an affair with Diego, then she should have spoken up. For me, it’s starting to look like she wants this to happen – to make it look like she’s in a relationship with my boyfriend.)

She said that she planned to keep silent when the accusations first circulated online, but she felt compelled to defend her boyfriend because Diego continues to be accused of infidelity.

(I didn’t speak up about it for so long. My poor boyfriend was being put in a bad light.… Just don’t attack the person I love, because I will really speak up for him.)

Despite the issues surrounding them, Barbie said that this situation has made her relationship with Diego stronger.

(We grew stronger because of these issues. We’ve talked about it. There are only two possibilities – that this would break us apart, or that this would make us stronger. We chose to become stronger.)

Both Diego and AJ have yet to address the issue themselves. – Rappler.com