‘Ano ba talaga ang plano?’ Here’s what PH celebs were tweeting ahead of the 2020 SONA 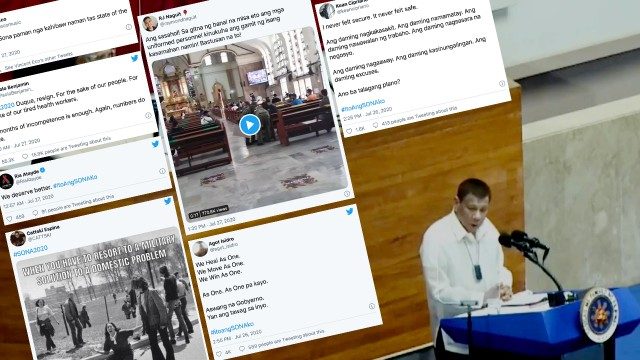 Facebook Twitter Copy URL
Copied
Even before Duterte spoke for almost two hours, celebs voice out their own take on the State of the Nation

Ahead of President Rodrigo Duterte’s fifth State of the Nation Address, several celebrities voiced out their opinions on the administration’s performance this past year using the hashtags #ItoAngSonaKo, #SONA2020, #SONATotoo and #SONAgKAISA.

Actress Anne Curtis-Smith was one of the first to speak out, posting on Instagram: “Sana mayroong plano kung paano susuportahan and [pag-aaral] ng kabataan ngayon na hindi sila makakapasok sa eskwelahan due to COVID-19.” (Hopefully, there will be a plan to support the education of children now that they are unable to go to school due to COVID-19).

She later tweeted the same message on Twitter using the hashtag #SONATotoo.

Kapamilya actress Bianca Gonzales also took the opportunity to promote the use of the hashtags #SANA2020 and #ItoAngSONAKo for the upcoming SONA as means to encouraging political discourse among her followers.

Musicians, such as Paolo Guico of Ben&Ben and Kean Cipriano, also tweeted about the annual presidential address. Guico, in particular, used the hashtag #SONA2020 to call for the resignation of the Department of Health Secretary Dr. Francisco Duque III due to his “five months of incompetence.”

Artists from Cebu didn’t hesitate in expressing their opinions either, as Cattski Espina, musician and founder of 22TangoRecords, tweeted a meme using #SONA2020 with the caption “When you have to resort to a military solution to a domestic problem you have failed.”

Isidro, in the tweet, means to reference the documentary Aswang, which tracked the impact of President Rodrigo Duterte’s “war on drugs” on poor Filipino families.

The internet’s darling Mimiyuuuh made her own subtle statements, this time regarding the PNP stationed at UP Diliman for the #SONAgKAISA protest.

The vlogger retweeted a post from @maykamaykaba that emphasized the difference between protesters who observed physical distancing and police in formation.

Actress and singer Maris Racal retweeted a video from RJ Naguit, which showed police seizing protest materials from protester in the middle of mass.

Phi Phi Palmos, who was part of the musical Huling El Bimbo, poked fun at police not being in-sync as they marched along Commonwealth Avenue.

Fellow director Quark Henares also tweeted about his discussion with Aswang director Alyx Arumpac, where they discuss what Henares said was the real state of the nation.