Facebook Twitter Copy URL
Copied
Agot Isidro, Bituin Escalante, and Eugene Domingo are among those who join the campaign 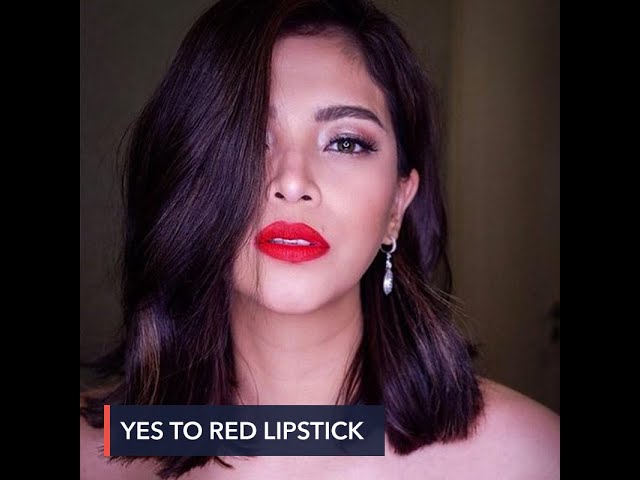 Celebrities showed their support for actress Angel Locsin’s #noredtagging campaign by wearing red lipstick in their photos over the weekend.

The statement was accompanied by a photo of Locsin wearing a red dress and lipstick with the hashtags #NoToRedTagging and #YesToRedLipstick.

#NoToRedTagging #YesToRedLipstick 😅 To set the record straight, hindi po ako parte ng NPA or any terrorist group 😅. Neither my sister nor my kuya Neri is a part of the NPA or any terrorist group. We live in a country where our freedom to speak and express ourselves are enshrined and protected by the Constitution. May paniniwala ako, may paniniwala sila, may paniniwala ka. At sa ilalim ng Consitution, pareho tayong mayroong karapatan sa ating mga sariling paniniwala. Kung mag kaiba tayo, hindi ibig sabihin pwede mo na ako i-red tag. Hindi tayo magkakalaban dito. Hindi rin ako “red”. Magkaiba lang tayo ng paniniwala. Nanawagan po ako sa kinauukulan, na itama po ang mali na ito. Tigilan na po ang red tagging. The statement made is utterly false and places ordinary citizens like us, those who they swore to protect, in danger. Nakakalungkot po isipin na dito napupunta ang malaking halaga na 19.3B, sa mga paratang na walang basehan at pananakot na red tagging. Sana ibigay na lang po sa ibang departamento ng AFP katulad ng medical reserve corps o pagtaas ng sweldo at pension ng mga sundalo natin. Malaking tulong rin po for purchasing vaccines or other covid response programs. Many of our country men need financial assistance. Mga OFW na nawalan ng trabaho. Madaming mas nangangailangan ng pera ngayon. Sana doon na lang ilaan at sana doon ibuhos ang oras. I am also appealing to everyone to express support for those being red-tagged like Liza Soberano, Catriona Grey, and all the others just because they are expressing their beliefs peacefully By being vocal about my opinions and advocacies, I have always been attacked. Those I could ignore but this is a different level altogether. And so I have to speak up once again because this baseless and reckless red-tagging jeopardizes not only my safety, but also the safety of my sister and our family. 💋

(I am thankful that I was born in a country that is free, that has democracy and respect my right as a human, woman, and member of society.)

(To echo the words of my daughter Lyka, #YesToRedLipstick and #notoredtagging in support of our empowered Filipinas. #DarnaDiKaNagiisa)

Pia Magalona, wife of the late rapper Francis Magalona tweeted: “#YesToRedLipstick #NoToRedTagging In solidarity with empowered women and in support of Filipinos who are trying to be silenced by the powers that be. “

Bituin Escalante and Eugene Domingo also joined in the campaign.

His statements were criticized by online users.

Soberano’s camp says the actress remains “apolitical” while Gray’s lawyer Joji Alonso issued a statement saying Parlade’s statement “is completely uncalled for.” Locsin has denied Parlade’s allegations, while ABS-CBN, the two actress’ home network, backed the two and urged officials to encourage speaking out without the fear of red-tagging. – Rappler.com