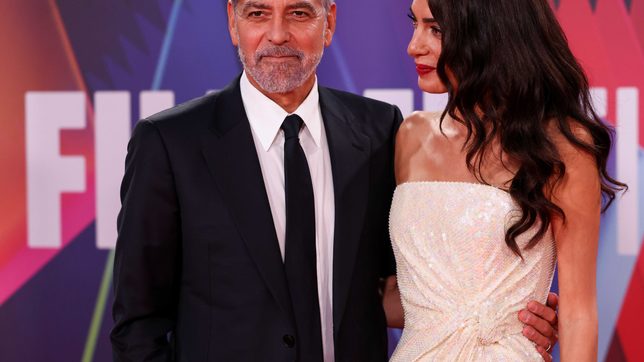 Director George Clooney and his wife lawyer Amal Clooney arrive for a screening of the film "The Tender Bar" as part of the BFI London Film Festival, in London, Britain, October 10, 2021.

Facebook Twitter Copy URL
Copied
The actor appeals to news outlets to keep his four-year-old twins' faces out of the press, fearing that public photos would put their lives in jeopardy

George Clooney has appealed to news outlets to keep his children’s faces out of the press, saying he fears that public photos would put their lives in jeopardy.

Clooney, who has four-year-old twins with his human rights lawyer wife Amal Clooney, said in an open letter to the media he accepted that “oftentimes intrusive photos” were part of the price he had to pay for being a celebrity.

“Our children have made no such commitment,” the Oscar-winning star wrote in the letter released late Thursday, November 4.

Clooney, 60, said his wife’s job, which involves working against extremist groups, meant the couple had to take precautions to keep the family safe.

“We cannot protect our children if any publication puts their faces on their cover. We have never sold a picture of our kids, we are not on social media and never post pictures because to do so would put their lives in jeopardy.

Amal Clooney specializes in human rights and international law. Her work has included representing victims of atrocities in Iraq, people fighting for freedom of speech in Egypt, and working with the United Nations on inquiries into the civil war in Syria. – Rappler.com