IN MEMORIAM 2020: Remembering people from the Philippine entertainment, fashion industry 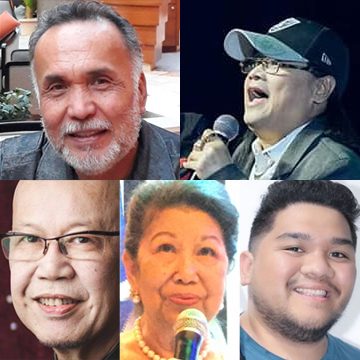 On January 19, Hotdog bassist Dennis Garcia passed away. Hotdog has been credited as one of the pioneers of the “Manila Sound” in the ’70s.

In March, former Sampaguita Pictures actress Liberty Ilagan died at the age of 76. Ilagan is the daughter of National Artist and director Gerry de Leon.

Veteran actor Menggie Cobarrubias also died in March at the age of 66 due to complications of pneumonia.

Pita Revilla-Hocson, mother of actor Bernard Palanca died in California on March 19. Pita is one of the daughters of the late actor Armando Goyena and Pacquita Roces, a former Camay Girl.

In April, Leila Benitez-McCollum, who is known as one of the first hosts of Student Canteen died in the US after complications due to COVID-19.

In May, director Peque Gallaga died at the age of 76. Gallaga is one of the country’s top directors with works such as Oro, Plata, Mata, Magic Temple, and Tiyanak.

Hagibis singer and actor Sonny Parsons died on May 10 at the age of 61.

Anita Linda, Alice Lake in real life was considered as one of the oldest working actresses before her death at the age of 95.

Lilia Dizon, who passed away at 92 is the mother of actors Christopher de Leon and Lara Melissa de Leon.

Former senator and actor Ramon Revilla Sr died at the age of 93 due to heart failure.

In July, designer Brian Tenorio died at the age of 42.

On August 5, former broadcaster and senator Eddie Ilarde died at 85 years old. Ilarde was also part of Student Canteen as a host.

Gabby Concepcion’s mom Lourdes also died in August. News of her death was confirmed by her granddaughter KC Concepcion.

In the online world, people mourned the death of YouTube creator Emman Nimedez who passed away after battling leukemia.

September was rocked by the sudden death of vlogger Lloyd Cadena who died at 26. His family later confirmed that he tested positive for COVID-19 before his death.

The entertainment industry also bid farewell to movie producer Marichu Vera-Perez Maceda. Marichu is one of the daughters of the late Dr. Jose Vera Perez, who headed Sampaguita Pictures.

In October, choreographer and director Al Quinn passed away at 86 in the US.

In November, actress Mila del Sol died at the age of 97. She is best known for her role in the film Giliw Ko and Ibong Adarna.

Ice Seguerra said goodbye to his father Dick on November 15.

The music industry also grieved at the sudden deaths of Slapshock frontman Jamir Garcia at 42 and April Boy Regino at 59 years old.

The start of December saw the fashion industry mourning the death of fashion designer Jeffrey Rogador at 42.

One of the late Comedy King Dolphy’s sons, Edgar Quizon died and was confirmed by his brother, actor, and director Eric Quizon.

The curtains of the theater closed for director Freddie Santos, who passed on at 64 after struggling with diabetes for years.

On December 27, singer Ray An Fuentes confirmed that his wife Mei-Ling died after battling COVID-19.