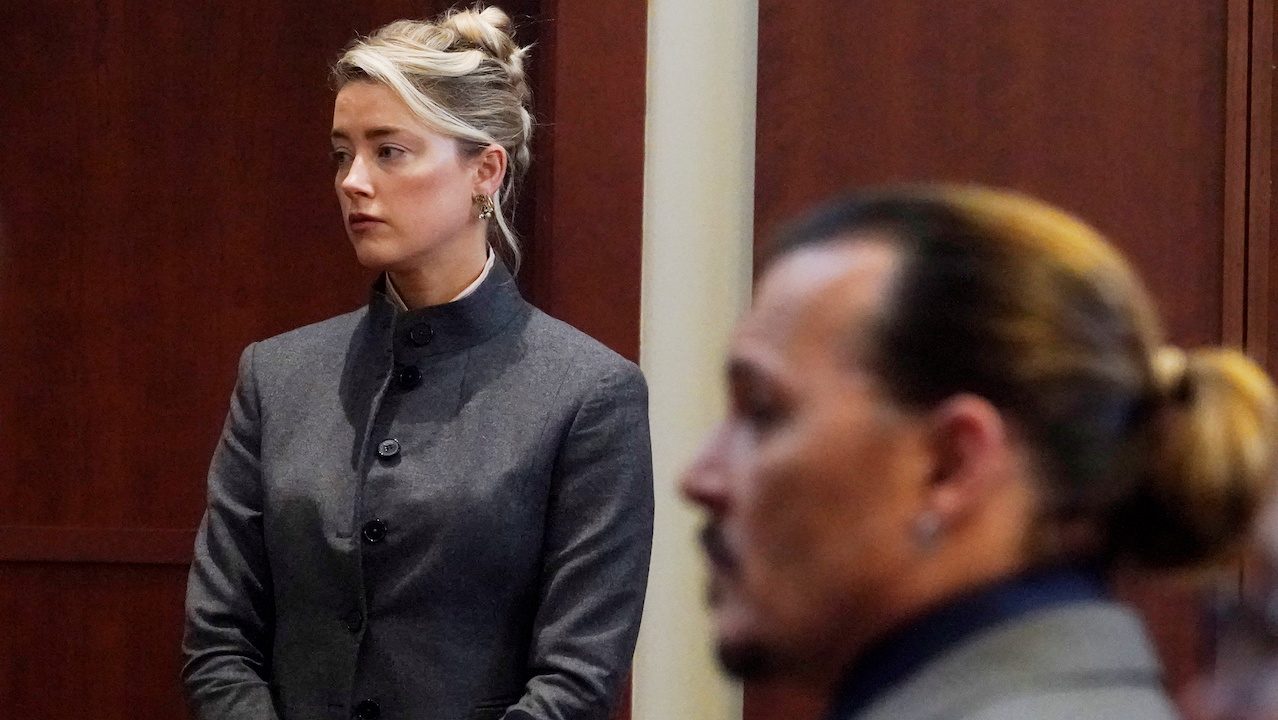 Actor Johnny Depp walks into the courtroom after a break at the Fairfax County Circuit Courthouse in Fairfax, Virginia, U.S., May 16, 2022. Steve Helber/Pool via REUTERS

Facebook Twitter Copy URL
Copied
The actor is suing his ex-wife for $50 million, saying she defamed him when she claimed she was a victim of domestic abuse

LOS ANGELES, USA – Johnny Depp’s attorney grilled the actor’s ex-wife Amber Heard on Tuesday, May 17, producing affectionate notes she wrote during their short-lived marriage to challenge her accounts of frequent violence and bolster the Pirates of the Caribbean star’s case for defamation.

Depp, 58, is suing Heard for $50 million, saying she defamed him when she claimed she was a victim of domestic abuse. He has testified that he never hit Heard and argued that she was the abuser in their relationship.

During her cross-examination, Depp lawyer Camille Vasquez showed jurors a knife Heard bought Depp as a gift in 2012. Heard, best known for her role in Aquaman, said Depp had already turned violent by then and often lashed out at her when he was drunk or using drugs.

“This is the knife you gave to the man who would get drunk and violent toward you?” Vasquez said to Heard, who responded that she did not think he would stab her with it.

Heard, 36, has countersued Depp for $100 million, arguing that Depp smeared her by calling her a liar. She said she only hit Depp to defend herself or her sister.

On Tuesday, Depp’s attorney read entries from a journal that Heard said the couple kept to share love notes.

“True love isn’t about just the madness of passion or instead picking the safety of peace. No, it’s about both,” Heard wrote in May 2015, two months after an argument in which the top of Depp’s right middle finger was cut off.

“I still, perhaps more than ever, want to rip you apart, devour you and savor the taste,” she added.

Depp has said Heard threw a vodka bottle that injured his finger, while Heard said it was likely Depp harmed himself when he smashed a phone into “smithereens.”

In another journal excerpt, after their July 2015 honeymoon aboard the Orient Express, Heard said she “couldn’t imagine a more gorgeous honeymoon,” and added, “I love you more and more every passing day.”

Heard had told jurors on Monday that Depp assaulted her and wrapped a T-shirt around her neck during the trip.

Asked about entries, Heard said she tried to “nurture as much peace” as possible, and that “when things were good they were really good.”

Vasquez also showed jurors a proposed schedule for her wedding to Depp. The agenda included time for a “dance party and drugs and music” after the rehearsal dinner.

“You planned to have drugs at your wedding to someone you characterize as a drug addict?” Vasquez asked.

Heard said the schedule was a draft that underwent changes.

The actors wed in February 2015 and their divorce was finalized about two years later.

The legal case centers on a December 2018 opinion piece by Heard that appeared in the Washington Post. The article never mentioned Depp by name, but his lawyer told jurors it was clear that Heard was referencing him.

Depp, once among Hollywood’s biggest stars, said Heard’s allegations cost him “everything.” A new Pirates of the Caribbean movie was put on hold, and Depp was replaced in the Fantastic Beasts film franchise, a Harry Potter spinoff.

Heard’s attorneys have argued that she told the truth and that her opinion was protected free speech under the U.S. Constitution’s First Amendment.