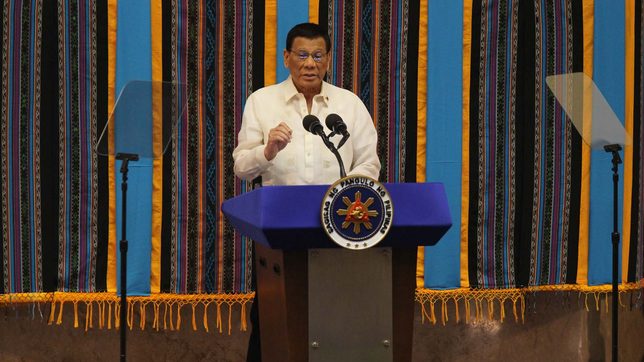 President Rodrigo Duterte delivers the State of the Nation Address on July 22, 2019, during the opening of the 18 Congress. Photo by Ben Nabong/Rappler

Filipino director Joyce Bernal said her take on President Rodrigo Duterte’s 2020 State of the Nation Address (SONA) will be simpler but with a “different flavor” that’s “very Filipino.”

Bernal, best known for directing comedy and romance films, will be directing the annual address for the 3rd year in a row. The director went around the Batasang Pambansa, the headquarters of the House of Representatives, on Thursday, July 23, ahead of the SONA on July 27.

(It has to be much more simple but it’s also complicated, technically speaking, because while the number of people inside is now limited, there are remote areas that I have to include in the coverage. The video conference, I have an IT team who’ll handle that for me. But I’ll be studying that on the day itself because the lockdown begins tomorrow. The technical rehearsal for the SONA will happen on the day itself.)

Strict health and safety protocols will be in place at the Batasang Pambansa for the July 27 SONA. Only 50 officials from the executive and legislative branches of government will be allowed to witness Duterte’s speech in person. Everyone else will join virtually.

Those who will be allowed inside – select government officials, lawmakers, guests, and support staff – will have to take two coronavirus tests before the July 27 SONA. Those who test positive will not be allowed to enter the plenary hall – where House sessions and the SONA will take place.

Bernal said because of the cap on warm bodies inside the plenary hall, every other part of the SONA – save for Duterte’s speech – has been pre-recorded. This includes the national anthem, the opening prayer, and any other performances. Shooting for the pre-recorded portions are ongoing and will wrap up on July 23.

The director said this time, they’ve had “more time” to prepare visuals for Duterte’s SONA – with a caveat that even they don’t know what’s in it.

Bernal infamously travelled to Sagada in hopes of shooting a segment for the 2020 SONA. They were turned down by several local government units, citing coronavirus quarantines and policies. – Rappler.com