‘We grew together’: Kathryn Bernardo, Daniel Padilla recall a decade together in showbiz 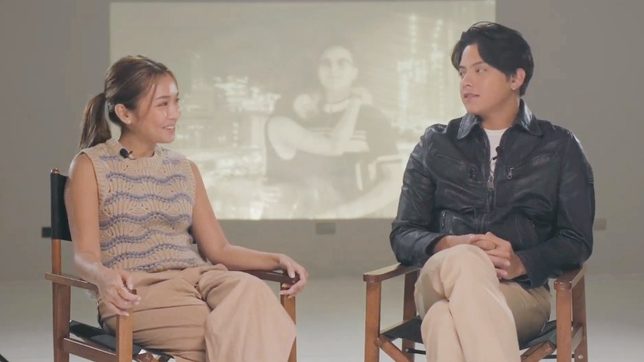 To celebrate their 10th anniversary as an on-screen couple, Kathryn Bernardo and Daniel Padilla, collectively known as KathNiel, released a documentary titled KathNiel: Isang Dekada on Saturday, September 25 as a tribute to their fans.

The 90-minute video features never-before-seen clips of KathNiel from their shoots and interviews with Kathryn and Daniel’s family, friends and supporters.

Fans were taken on a trip down memory lane, with the documentary narrative the start of Kathryn and Daniel’s tandem and how they’ve continued to grow both as on-screen and off-screen partners, through the years.

“Grabe pala ‘yung pinagdaanan namin… Noong bata ka, pinapangarap mo lang talaga to be a successful artist (I didn’t realize that we went through a lot. When we were young, we were just dreaming of becoming successful artists)… I’ve never thought that I will get to experience that and be part of the loveteam,” Kathryn said in the start of the documentary.

Min recalled that even at a young age, Kathryn was already interested in seeing herself on television. Back then, their family had to travel all the way from Cabanatuan, Nueva Ecija just to attend the auditions and go-sees in Metro Manila. From doing several VTRs, Kathryn then became part of ABS-CBN’s kiddie gag show Goin’ Bulilit.

Karla, meanwhile, said that her son was a shy kid who had potential. Daniel admitted that he skipped several auditions because he was too shy and anxious. It was their family’s struggles that eventually made Daniel push through in pursuing a showbiz career.

Both tried their luck in showbiz. Kathryn had her first break in the drama Mara Clara while Daniel launched his career in Gimik 2010. They had different love team partners then, and it was only in the 2011 series Growing Up that they were first paired together.

“Alam ko namang sikat na artista na siya ‘noon (I knew she was already a famous actress then) and I was nothing,” Daniel said on working with Kathryn for the first time. He added, “But she was very welcoming, she was very polite.”

(It wasn’t love at first sight. I didn’t even expect that he will be my partner for the next 10 years. I had no idea that our tandem would work.)

She added that they didn’t jive at first, since they’re both shy individuals. It was only halfway through filming Growing Up that they got to know each other.

“Naging kaibigan ko siya, walang intensyon na maging boyfriend (He became my friend. There was no intention of him being my boyfriend),” Kathryn said.

From reel to real

After Growing Up ended, Kathryn and Daniel led in their first primetime series Princess and I, together with Enrique Gil and Khalil Ramos.

(He was already courting me in Princess and I. But we got together at the start of the series. There was too much jealousy, since I had two other leading men aside from him. And we were both young.)

“10 years as a love team, 9 years as real boyfriend and girlfriend,” Kathryn said that she and Daniel became official on May 25, 2012. It was in 2018 when they first publicly confirmed their relationship.

She shared that it was when they were doing mall shows for Princess and I that she started realizing how well-loved their love team was. “Iba ‘yung pagtanggap samin ni DJ eh, sobrang warm (The reaction for our tandem was different. They received us so warmly)” she said.

(For the past 10 years, it hasn’t sank in that we were the biggest love team because DJ and I did not make each other feel that way… Sometimes, we forget about how big our impact was since we’re both busy achieving the goals we want to achieve.)

Both Kathryn and Daniel said the past 10 years weren’t easy.

(It’s hard when you’re fighting but you have to act nice in front of the camera or during mall shows since you can’t let others know that you’re having a tough time. You have to make others feel kilig when deep inside, you’re just really mad at each other.) But Kathryn said having someone to share all successes and failures with is the best part.

Daniel also acknowledged that their relationship has not been perfect. “Ako nagkamali, siya rin may pagkakamali pero inayos namin. Pareho naming pinili ‘yung love above all. Partner ko na ‘to at hindi ko na kakayanin na mawala ‘to sa akin. I’m just very lucky to have her as a partner in life,” he said.

(I did something wrong, she did too. But we fixed it. We both chose love above everything else. She’s already my partner and I can’t let go of her.)

Kathryn and Daniel recognize that celebrating a decade in the industry is already a feat in itself. But more than their hard work as artists, the duo praise their loyal supporters who made their success possible.

“We’d like to call them our family. They’re more than just fans,” Kathryn said. “Ito ‘yung fans na wala ka nang hihilingin pa (These are the fans that you’d ask for nothing else).”

Daniel said that he admires how their fans have supported not only them but also their advocacies. “[They’re] a group of people who want to make a difference out of the industry… It’s very inspiring.”

(I can’t put into words how thankful and grateful we are for the time they gave us, and for their love. These fans don’t control us. They see us as human beings and not just idols.)

Kathryn said, “If there’s one thing we want to be remembered for – it’s the fandom, or the family that made everything impossible possible.”  – Rappler.com