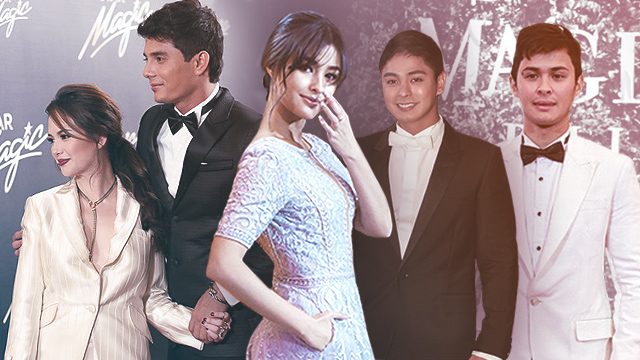 MANILA, Philippines – The Star Magic Ball has come a long way since it started in 2007 – from a black-tie celebrity party to an ultra-glamorous red carpet affair. It even has a new name : the ABS-CBN Ball.

Through the years, we’ve seen some big-screen drama spill onto the red carpet – whether it’s a showstopping look, a covert flirtation, or a star who looked like she had a little too much to drink.

As celebrities gear up for yet another, here’s a look back at some of the ball’s most memorable moments.

Bea Alonzo and Gerald Anderson exit the ball together in 2010

This may be where it all began for the are-they-or-arent-they couple and their joint Star Magic Ball history. At the 2010 ball, they arrived with different dates – Gerald with Kim Chiu and Bea with Zanjoe Marudo – but were spotted leaving the ball together at the end of the night.

Coco Martin and Matteo Guidicelli get in a fistfight in 2011

Perhaps the most memorable scandal in Star Magic Ball history was this fistfight, which reportedly stemmed from jealousy over Maja Salvador, who was dating Matteo at the time.

The fight supposedly started when Coco, Maja’s co-star in Minsan Lang Kitang Iibigin, allegedly kissed Maja at the ball’s after party. Both parties have since reconciled, and Matteo has been in a long-term relationship with Sarah Geronimo.

Billy Crawford gets detained in 2014

Another post-Star Magic Ball incident saw Billy being detained by the police after he reportedly got aggressive when asking for help at a police precinct after the ball. He has since apologized, and admitted to having had a few drinks at the time.

Ellen Adarna apparently gets drunk in 2015

Ellen evidently had a great time at the 2015 ball – though it caused quite the scandal when videos of her apparently drunk were aired on the news. In the footage, Ellen can be seen briefly holding Paulo Avelino’s hand – which made the moment even more scandalous, because she attended the ball with Pasion de Amor co-star Ejay Falcon, who later defended Ellen amidst criticism, saying that she was an “amazing date.”

The Star Magic Ball has become more and more of a fashion event in its more recent editions – and with celebrities consistently upping their glam game year after year, the world was bound to see some truly iconic looks down that red carpet.

Perhaps the most memorable look was Liza at the 2016 ball, wearing a heavily-beaded, backless, powder blue Michael Cinco ballgown. With one hand in her pocket and the other occassionally sweeping aside those inspired wispy bangs, Liza was a picture of youthful elegance – and her look that night had people talking long after the ball had ended.

John Lloyd has been known for debuting his relationships on the Star Magic Ball carpet – and in the run-up to the 2017 ball, rumors were flying thath John Lloyd was dating Ellen Adarna. Fans hoped they would confirm their relationship by turning up to the event together.

Instead, John Lloyd went solo and didn’t even make an appearance on the red carpet. A few days after the ball, he announced that he would be taking an indefinite leave from showbiz, and months later, he and Ellen were rumored to be expecting. They now reportedly have a child – though neither of them have publicly confirmed it. – Rappler.com