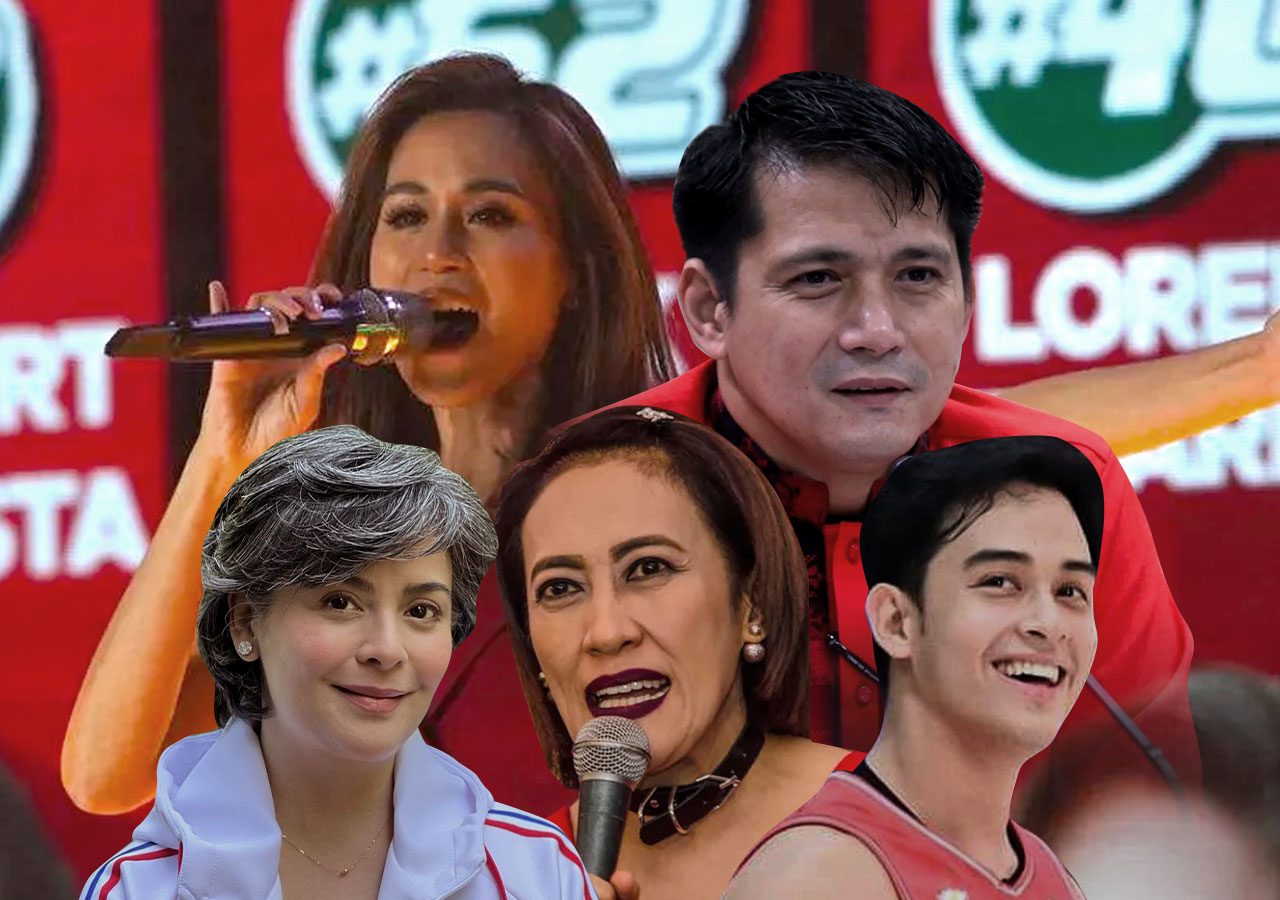 Facebook Twitter Copy URL
Copied
From signing new contracts to starring in a Marcos-aligned film, these are what the President's celebrity campaigners have been up to

MANILA, Philippines – President Ferdinand “Bongbong” Marcos Jr. is nearing his first 100 days in office, and it’s apparently been an eventful time for the jet-setting President, whose recent attendance at the F1 Grand Prix in Singapore is only the latest of his activities to raise questions.

No doubt, Marcos’ road to Malacañang would not have been as successful without the presence of his loyal celebrity supporters – some of whom were once the biggest names in Philippine showbiz.

Star power: Which local celebrities are endorsing which 2022 presidential candidates? While the President attends both official events and parties, his showbiz allies also seem to have been basking in their candidate’s victory, signing new contracts, bagging lead roles in a Marcos-aligned film, and pursuing new opportunities.

These are just some of the celebrities who have supported Marcos, and this is what they’ve been up to since:

Toni Gonzaga was arguably the biggest celebrity among Marcos’ star supporters – and also among the most vocal. Even before Marcos announced his candidacy in October 2021, Gonzaga interviewed him in a September 2021 episode of her vlog in a controversial episode that whitewashed the bloody legacy of Marcos’ father and namesake, the dictator Ferdinand Marcos Sr.

The actress and host then became a fixed presence at Marcos’ sorties throughout his campaign, while her husband, Paul Soriano, directed the then-candidate’s ads.

Gonzaga left her longtime gig as host of Pinoy Big Brother early on in the Marcos campaign, but her career shows no signs of slowing down. The actress recently signed a contract with the Advanced Media Broadasting System (AMBS), the media company whose flagship channel AllTV is taking over the channel previously used by embattled media network ABS-CBN.

She was also revealed as the newest endorser for e-commerce platform Shopee – though the move put the site under fire and led many people to say they would boycott it.

As the wife of Marcos’ childhood friend and top campaign donor Anton Lagdameo, Dawn Zulueta showed her support for the President with occasional posts on social media.

The veteran actress has been selective of her TV and film gigs in recent years, but recently appeared in the ABS-CBN series A Family Affair, which stars Ivana Alawi, Sam Milby, and Gerald Anderson. She also maintains a strong presence on Instagram, where she has 1.8 million followes.

Meanwhile, her husband was named Special Assistant to the President – a position created by former president Rodrigo Duterte for his long-time aide Bong Go.

Diego Loyzaga and Cesar Montano have not been shy about their support for Marcos and Vice President Sara Duterte. The father-son tandem supported Marcos both online and on-ground throughout the campaign period, even attending a Marcos-Duterte event together in Cebu.

Following Marcos’ win, Loyzaga and Montano starred together in the historical fiction film Maid in Malacañang, where they played Marcos Jr. and Marcos Sr. respectively, alongside Cristine Reyes, Ella Cruz, and Ruffa Gutierrez.

At the time, Torres said that Marcos was the only presidential candidate to come to the aid of their bailiwick Ormoc City during disasters – though this claim was disproved after a quick fact-check revealed that presidential candidates Manny Pacquiao and Leni Robredo also provided aid to Ormoc.

The husband-and-wife politicians recently traded posts in the previous elections – with Torres taking over from Gomez as Ormoc City Mayor, and Gomez succeeding Torres as Leyte’s 4th District Representative.

Nora Aunor has been a longtime Marcos loyalist, even attending the controversial burial of Marcos Sr. at the Libingan ng Mga Bayani in 2016. It was no surprise that she backed Marcos Jr. in the recent elections, taking to social media to show her support.

Today, the veteran actress holds the status of National Artist for Cinema, after being declared in June by then-president Rodrigo Duterte.

Ai-Ai delas Alas is a vocal supporter of the UniTeam, performing at several of their campaign rallies and wearing their campaign colors at other election events.

She was even named persona non grata in Quezon City after appearing in a video that showed the seal of the city replaced with the text “BBM SARA.”

After celebrating the UniTeam’s win with posts on social media, Delas Alas went on to perform at the GMA Pinoy TV concert in the United States, where she has apparently been living. She also said that she is prioritizing getting her US citizenship, after being a green card holder for years.

Randy Santiago has been a fixture in Marcos’ campaign from the beginning, performing at the then-candidate’s proclamation rally, and later on playing emcee at several UniTeam events alongside his longtime friend and co-host Bayani Agbayani.

Even after Marcos won the elections and was inaugurated, Santiago continued to lend his star power to the President, leading the President’s thanksgiving concert.

Santiago currently hosts the reality karaoke competition Singgaling, which airs on TV5. He also appeared at the AllTV launch in September, where he introduced the network’s music variety show InstaJam.

Bayani Agbayani regularly hosted the UniTeam’s events as they took their campaign all over the Philippines. Along with Delas Alas, he was the emcee at Marcos and Duterte’s Miting de Avance. Like Santiago, he also appeared at Marcos’ thanksgiving concert and attended the President’s inauguration.

He also consistently posted in support of Marcos on social media, with his Instagram feed during the campaign period awash in UniTeam red and green.

Isabelle Daza’s ties to the President have long been known. Marcos, a close friend of Daza’s late father Bong Daza, was the one who walked her down the aisle at her 2016 wedding to Adrien Semblat.

Despite not being vocal about her support throughout his campaign, Daza attended Marcos’ inauguration on June 30, alongside her mother, beauty queen Gloria Diaz.

The actress, TV host, and model is set to appear in the upcoming series K-Love, alongside Iza Calzado, Sue Ramirez, and Gabby Padilla. She also hosts a sex podcast, The Sexytime Podcast with her sister Ava Daza, and is a regular guest host on Tropang LOL.

Robin Padilla actively supported Marcos during the election period, despite running as senator under a different party, PDP-Laban (though this party would also endorse Marcos eventually). The action-star-turned-politician appeared in various UniTeam events, and was even called a “guest candidate” by Sara Duterte.

Padilla won the senatorial elections by a landslide, emerging as the top Senate pick despite being a first-time candidate going against veterans. He continued to back Marcos after their election success, saying in an interview that he believes Marcos will do everything for the country, and now has the opportunity to wipe his family name clean.

In one of his earliest moves as Senator, Padilla pushed for the legalization of medical marijuana. He also recently underwent a heart procedure, and is recovering as of this writing. – Rappler.com