‘Take it slow’: Nadine Lustre shares how she got over her breakup 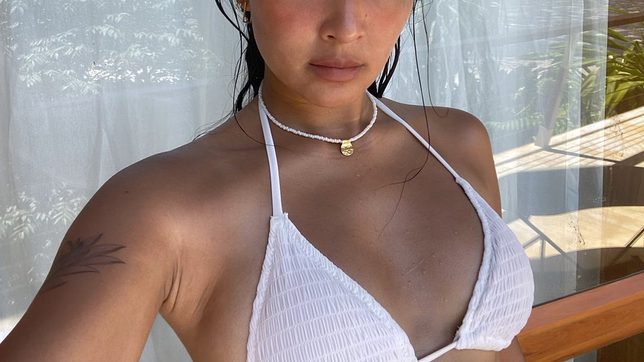 NADINE LUSTRE. The actress shares how she healed after going through a breakup.

Facebook Twitter Copy URL
Copied
‘It’s like I’m meeting Nadine again for the first time,’ she said on an episode of the ‘Waking Up with Jim and Saab’ podcast

Nadine Lustre opened up about how she healed from her breakup, saying that she was “pretty much in limbo” for over a year after it happened.

Nadine was the featured guest on the November 11 episode of the Waking Up with Jim and Saab podcast hosted by husband-and-wife musicians Jim Bacarro and Saab Magalona. Towards the end of the episode, Saab had asked Nadine what she learned after breaking up with a long term boyfriend.

Nadine didn’t name names, but it was apparent that she was referring to her ex and former love team partner, James Reid. The two broke up in January 2020 after being together for almost four years, though they continued to work together after their split as Nadine launched her music career under James’ label in 2020.

“I guess one advice is just to take your time,” Nadine said. “Wounds won’t heal that easily. It will take time but it’s super worth it in the end.”

Nadine shared that the pandemic hit soon after her breakup, so she was stuck at home and couldn’t see her friends.

“I was in my feels the whole time. I was reflecting on all the things that I’ve done, the person I’ve become. It’s like I was having conversations with myself and I was trying to get to know myself again as an individual…. It’s like I’m meeting Nadine again for the first time,” she said.

She said she tried things she’s never done before but always wanted to do – cooking, flower arrangement, painting. She also wrote songs and was able to finish her album, Wildest Dreams, which was released in October 2020, under James’ record label Careless.

Like most people who get out of relationships, Nadine also had her moments of wanting the relationship to be over.

“It was really weird because of course there were times that I was like…that you know, I wish this could still work out. You know, you’re still there eh, you’re still not over the relationship. But I was aware that it was slowly going away,” she shared.

“And at first, it was hard for me just because I was like, this couldn’t happen, this can’t go away because I still wanna be with this person, but one day I just woke up and then I told friend, ‘You know what, it’s not there anymore.’”

On the same episode, Nadine spoke to Jim and Saab about spending time in Siargao, falling in love with acting, her political views, being under the showbiz spotlight, and why she doesn’t take disrespect from anyone.

The singer and actress recently released her single “Wait For Me,” her last solo release as she puts her music career on pause to focus on a new film project. – Rappler.com