Facebook Twitter Copy URL
Copied
'He is able to somehow be everything to everyone all at once. He’s the most present person you will ever meet,' Blake Lively says of husband Ryan Reynolds.

LOS ANGELES, USA – With La La Land going back to normal, I have parted ways – with regret – with the stay-at-home “uniform” I’ve worn for two years of the pandemic: my ratty t-shirts and sweatpants.

These days, duty requires that I brush my hair again and put on those monkey suits gathering lint and dust in the closet.

But the upside is, it’s actually nice to be able to converse with human beings in person, instead of exchanging quick hellos then turning off my video and muting my audio in Zoom meetings.

In one of these recent events, it was especially worth dealing with the traffic again, because Ryan Reynolds, one of the genuinely nice guys in Hollywood, was being honored.

Inside the International Ballroom of The Beverly Hilton in Beverly Hills, talents, from Hugh Jackman and Octavia Spencer, to Nathan Fillion and Will Ferrell, saluted the Deadpool star onstage or via video.

Leave it to comedian Will Ferrell to deliver the funniest lines while honoring his friend and Spirited costar.

Rattling off the previous American Cinematheque awardees – “Steven Spielberg, Ron Howard, Martin Scorsese, Jodie Foster, and Sean Connery, just to name a few” – Will then dished, “And tonight you chose Mr. Ryan Reynolds. What were you thinking? What happened? Who fell through? He’s not even American, he’s Canadian!”

The most loving remarks came from Ryan’s wife, Blake Lively, who is pregnant with the couple’s fourth child. Speaking before the audience of top Hollywood executives and creatives, and the couple’s two oldest kids at their table, the actress shared that Ryan is always eager to go home, whether from shootings or junkets.

“If he came home from set not in his wardrobe, we would be very concerned – soaked in mud, fake blood, real blood, prosthetic scars, superhero suits, tap shoes, or clown makeup, Daddy always comes home. The man races back to his real life like nothing I’ve ever seen, especially not by someone who is able to be so all-in in his work life.”

“He is able to somehow be everything to everyone all at once. He’s the most present person you will ever meet. And yes, he creates magic in his work but man, oh man, does he create magic in his real life.”

Of course, there was a huge Canuck presence, especially in the video greetings, since Ryan is the first Canadian to get the award. No less than Canada’s prime minister, Justin Trudeau, sent a congratulatory video message. At one point, the audience even sang the country’s national anthem, “O Canada.”

After receiving the trophy from his frequent collaborator Shawn Levy, the man of the hour said, “I have never really taken myself too seriously, as many of you know, and it creates a pretty confounding paradox when I am celebrated by a very serious award show with prestigious company like this.”

“While I have been given the privilege to play in different fields and sandboxes, I am mindful that I’m primarily known as a movie actor, and that is humbling because movies bring people together in ways both figurative and literal. That togetherness feeling is, more than anything else, what I yearn for, what I yearn to create.”

Ryan then paid tribute to his spouse since 2012: “Most importantly, I get to spend my days working with my favorite collaborator of all, my wife Blake. You are the greatest ghostwriter in Hollywood history. You have literally authored me into this moment.”

Earlier in the evening, Jason Blum, the new horror master, thanks to his Blumhouse Productions, was also honored with the Power of Cinema Award. The man behind several fright movie franchises got his award from Universal Pictures’ head honcho, Donna Langley.

On another occasion, also in Beverly Hills – at the art deco landmark Saban Theatre, which opened as the Fox Wilshire Theatre in 1930 – the eighth Asian World Film Festival (AWFF) wrapped up another successful edition.

Last Film Show, writer-director Nan Palin’s ode to cinema, copped the best film honors. Originally titled Chhello Show, the film, which is India’s bet to the Academy’s best international feature race, is a coming-of-age story of a nine-year-old boy (a wonderful Bhavin Rabari) who discovers the magic of movies.

My wife and fellow journalist Janet R. Nepales, who announced the night’s top prize with filmmaker Pitof (both were members of the feature film jury headed by actress Truong Ngoc Anh), introduced the winner with these words: “The best film encompasses everything we want to see in a great film – good storytelling, moving performances, technically appealing, visually intoxicating, and heartfelt connectivity to audiences. We received a lot of very good movies this year and it was a tough decision.”

“But this film reminded us of why we love cinema. It reminded us of cinema’s ability to both enchant and inspire. It is a love letter to cinema, to light, and to life itself.”

“The film is an ode to moviegoing as well as movie-making. It celebrates film and the cinematic experience.”

Iranian filmmaker Houman Seyyedi’s World War III, a drama about a widower whose life as a day laborer drastically changes when he lands a film role, won the special jury award.

In her announcement of Dania Bdeir (for Lebanon/France’s Warsha) as the recipient of the $5,000 scholarship best short award, Yong said, “The short films that my colleagues and jurors saw took us to outer space, San Gabriel Valley, remote, snowy terrain, a film set, a workplace high above the ground, and many other familiar and strange places and circumstances. This year’s entries show that oftentimes, a short film can deliver the most long-lasting impact.”

The evening’s pleasant surprise was the engaging presence of Binibining Pilipinas International 2010 Krista Kleiner, now an actress and philanthropist, who more than capably hosted the awards night with actor Jeff Locker.

Fil-Am actor Reggie Lee showed up to cheer on his friend, Francis.

Also in this group of upcoming Asian filmmakers was So Yun Um, whose documentary feature directing debut, Liquor Store Dreams, was one of my favorites at the 2022 Tribeca Film Festival. The doc has gone on to other fests, including the Busan International Film Festival and the BFI London Film Festival.

These young filmmakers will be mentored by Michelle Sugihara, executive director of the Coalition of Asian Pacifics in Entertainment (CAPE), a non-profit org that advocates for Asian Americans in the entertainment industry.

I was back another night at The Beverly Hilton for HFPA’s annual grants dinner. In the same ballroom where the HFPA hands out its Golden Globe Awards every January, the association announced $5 million in grants this year.

The aforementioned CAPE is one of the grantees of HFPA, which has given over $55 million in grants, scholarships, humanitarian aid, and donations to journalistic orgs, and has funded film restoration efforts in the last 28 years.

In her remarks, HFPA president Helen Hoehne, said, “There is one aspect of our association that will not change – and that is our commitment to philanthropy. This will always remain the core of our mission.”

“We have supported the arts, journalism, education, film restoration, and many other charitable endeavors. Our philanthropy has always focused on opening doors for young people and underserved communities.”

In the heart of Hollywood, at the Goya Studios, Showtime held its premiere of George & Tammy, an upcoming drama TV series on country music’s legendary duo, George Jones and Tammy Wynette.

In the first two episodes shown at the launch, Michael Shannon and Jessica Chastain – two of the finest actors of their generation – are, no surprise, terrific as the “first couple of country music.”

The miniseries, based on The Three of Us: Understanding My Mother, Finding My Father, and Growing Up with Tammy and George by Georgette Jones, the duo’s daughter, debuts on December 4.

Due to illness, James Bond actor Daniel Craig was a no-show at the premiere of his Glass Onion: A Knives Out Mystery at the Academy Museum. But Daniel and his unflappable detective Benoit Blanc, with his charming Southern accent, were very much present in Rian Johnson’s equally entertaining sequel.

Filipino-American Dave Bautista was also absent at the bash but his Philippine-inspired tattoos were all over the comedy-crime-drama. Knives Out 2 is set this time in sunny Greece, so Dave’s body, ornamented with Pinoy flag-themed tats, was on full display.

Afterwards, Kate, Goldie, Janelle, and the guests walked up to the Dolby Family Terrace with its stunning dome. These stars mingled with the guests at the party. Janelle lined up and got her own food at the buffet. No cordon sanitaire for these down-to-earth talents.

And last but certainly not least, Dolly de Leon blew into town for a whirlwind schedule of screenings and interviews for Triangle of Sadness, which is stirring further critical buzz for the Filipina actress. 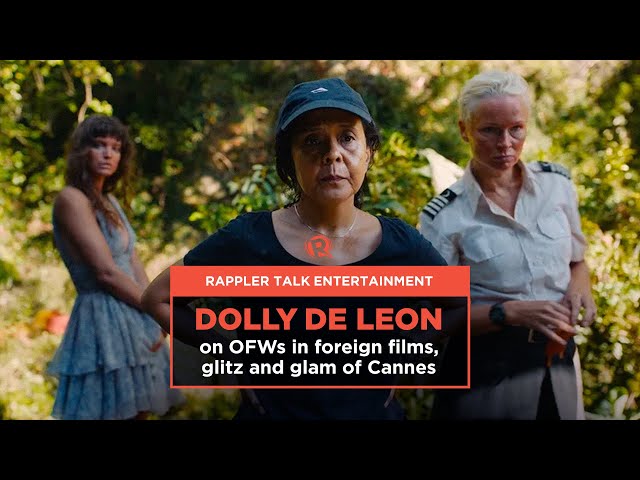 In the screening at the Directors Guild of America, guest Fil-Am dermatologist Tess Mauricio shared with Dolly that her client, no less than Julian Lennon, saw the film and raved about it.

At a dinner in Lem Balagot’s beloved Pinoy restaurant, LA Rose Café, the diminutive yet hugely talented actress whispered that she had to wake up early the following morning for a shoot with a world-famous fashion magazine.

On another night, Dolly signed a poster made for the Manila premiere of Triangle of Sadness. She steals Ruben Ostlund’s Palme d’Or winning film with a breakthrough performance as Abigail. The movie finally opens nationwide in the Philippines this week. Do see it! – Rappler.com