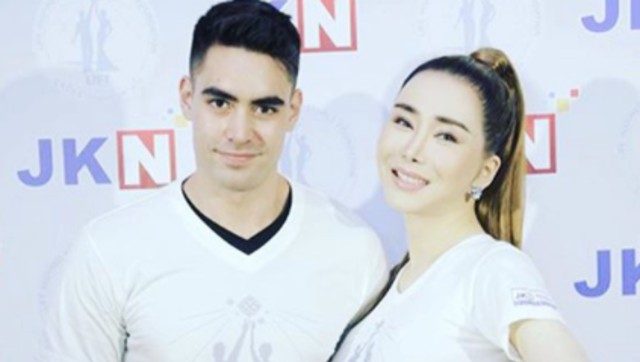 A Thai businesswoman linked to Filipino-German model and actor Clint Bondad addressed criticism against them, saying their relationship was that of “brother and sister.”

Jakkaphong “Anne” Jakrajutatip, who is CEO of JKN Global Media Public Company Limited, said that Clint is like a brother to her.

“He’s a good man. Brother sister. I love the way we were. I love the gentleman with a good mindset. I love my brother Clint and my family supports him in every way but what is right must be right,” Anne, a transgender woman, said on Instagram.

In an Instagram post on July 20, Anne posted: “ I don’t want a man who is a PSYCHOPATH in my life. I’m tired of a German sausage.” This was followed by several more posts, which followers speculated were referring to Clint and his own posts alluding to ex-girlfriend, Miss Universe 2018 Catriona Gray.

She addressed some of the comments, including one what asked if she was paying Clint.

“He comes to work in Thailand and earns his own money. He’s a good gentleman. As a sister, I only take care of him on life facilities and giving biz advice,” she said.

Anne also addressed another comment accusing her of being an attention-seeker. She said she does not need it since she has a lot of followers already.

“I feel pity that you don’t have the eyes to read what is happening and why I come to take care of this issue myself when I don’t actually need to. Plus I already have 8 million followers. I’ am already super-rich and famous. Also, I prefer the quality followers not the cheap mindset human being like you. Read it over or leave my page. Thank you.”

Anne also answered one person who said that she was acting like a “jealous girlfriend” in her posts.

“If I were his girlfriend I don’t need to be jealous as he’s already with me in the house for more than 9 months now. Please read through all the comments. You will get it. I’m his sister and as well the billionaire CEO with responsibility and kindness. If someone doesn’t do something right under my house, I would not tolerate for sure! Would you? Be mature. Not everything is about lust and sex. It’s all about what is right for other human beings!!”

Anne said she decided to address issues on social media to help Clint realize the consequences of his actions.

“For someone, you need to have the public confrontation to make him fear of doing it again next time. Just talking in the house is not enough comparing to social humiliation,” she told one commenter.

On Thursday, July 23, Anne clarified her earlier statement about Clint living with her.

In a new post, she wrote: “ I carried the contract of Clint Bondad from GMA since last year and he came to Thailand as our corporate artist since November 2019 which you can see in the news from time to time. He stays in One of my 8 houses, not with me in the same house!!!

“Don’t get me wrong. I treat and honor him as if my own brother which means that he’s the VIP guest to our team. GMA and ABS-CBN are the great biz partners to JKN for 5 years now. So every commitment is extremely important. Clint as well pursues his dream on having the business of his own with of course our support in terms of facility and manpower. I’m the CEO of the company who must take responsibility and would like to make this subject matter forward in the progressive way. Hope you guys understand now.”

Clint has been in the headlines for the past few days after he posted several cryptic messages on Instagram, seemingly referring to Catriona and her relationship with actor Sam Milby. Sam confirmed in May that he was dating the Filipino-Australian beauty queen and singer.

Sam issued a statement on Sunday, July 19 saying he will do everything to protect Catriona from various allegations thrown against her.

On Tuesday, July 21, Catriona went to the National Bureau of Investigation to seek help in filing complaints against those who have been spreading fake nude photos of her online. – Rappler.com