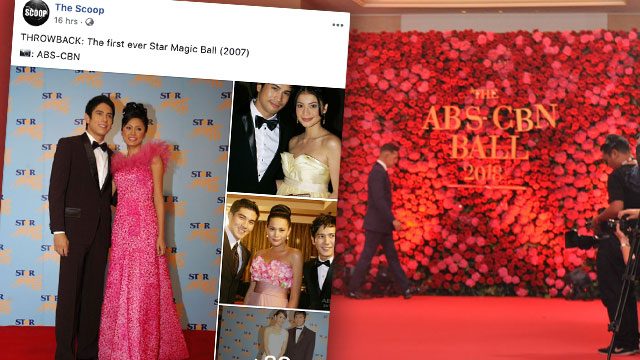 MANILA, Philippines – The ABS-CBN Ball, formerly known as the Star Magic Ball, is known to be one of the most glamorous events in local showbiz.

Who could forget Liza Soberano’s show-stopping moment, tucking her hands into the embroidered pockets of that dove gray Michael Cinco dress in 2016? Or Pia Wurtzbach in lacy Ezra Santos in 2017? Or Nadine Lustre and James Reid slaying in their edgy matching ensembles just last year?

For all its high fashion realness today, the first ever Star Magic Ball was a markedly different affair. It was, after all, held at the tail-end of an era that’s notorious for birthing fashion trends we’d rather forget. As a result, we got looks that were more JS Prom than celebrity red carpet – in the best way possible.

Viral photos posted on Facebook page The Scoop, show just how different the first ever ball was from the balls of today. It was a time when Bea Alonzo wore a bustier made of pink plastic flowers, when Kim Chiu‘s face was framed by an explosive tulle neckline, when Anne Curtis wore a shiny yellow mullet dress and tendrils, when Shaina Magdayao danced with Rayver Cruz wearing a gold dress that she could have worn in the wedding scene of Four Sisters and a Wedding.

It was a time when Piolo Pascual sported long hair and choppy bangs reminiscent of F4’s Jerry Yan, and when Kristine Hermosa stepped out with Diether Ocampo in a maroon gown with many confusing details.

Evidently, the ABS-CBN Ball – and the celebrities that attend it – have gone through a glow-up since then – and this year’s new Filipiniana theme makes the whole affair even more exciting. Until the red carpet rolls out on September 14 though, we have these delicious throwbacks to enjoy.

Which throwback look is your favorite? Sound off in the comments! – Rappler.com