MANILA, Philippines (UPDATED) – In what Mega Man magazine labelled as a "bold and daring" move, Charice Pempengco, a globally-known musician, graced the cover of their June 2016 issue.

It was the second time that the singer-songwriter – simply known as Charice –  appeared in the magazine (the first was in 2013 as one of the Most Powerful LGBTs). But needless to say, landing the cover itself was historic. 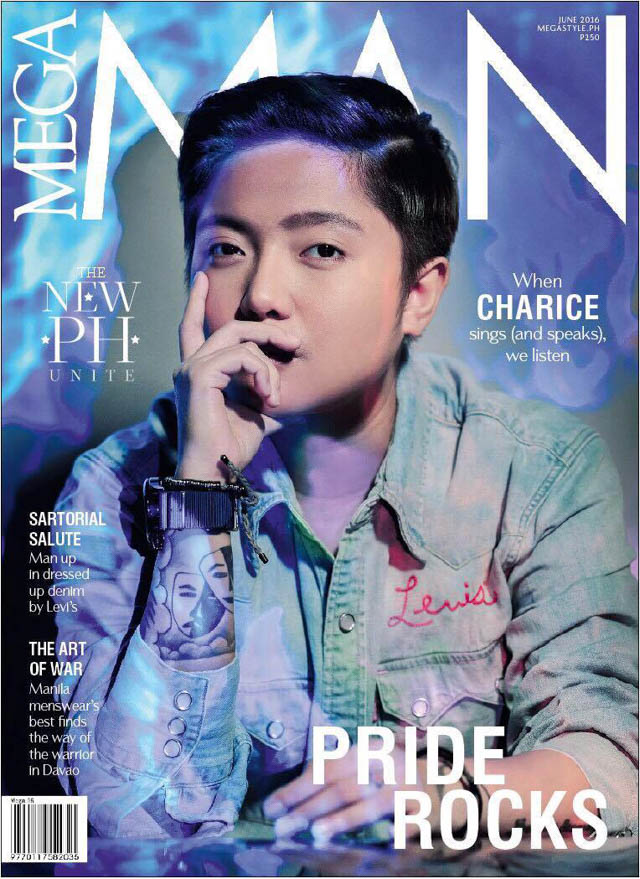 The magazine also noted that Charice is more comfortable with a male pronoun, "but isn't selfish enough to push people" to call him as such.

Charice told Oprah in 2014 that his "soul is male," but he is going through more a drastic transformation as a singer and songwriter. On the cover of Mega Man, he is clad in edgy Levi's clothing and armed with a "fresher sound" – beyond hits such as "Pyramid," which made him a global sensation.

He has reinvented his sound from that of a pop sensation to a rocker – as seen in one electrifying rendition he did of Nirvana's grunge standard, "Smells Like Teen Spirit," at one awards show.

Speaking to Rappler last March, Charice was excited to share that he has been working on a new album with tracks he penned himself – along with some help from rock band Mayonnaise. Meanwhile, Mega Man also said that the upcoming record is called Catharsis, which will be released in July.

"It was different, but good different," he told the magazine about how fans received his performances as of late, where he dished out guitar-shredding tracks like Guns N' Roses' "Sweet Child of Mine."

"They were shocked, but towards the end, they were like, 'Oh okay.' It's always like that, people judge first," he continued, assuring that the sound will be unlike the late Nirvana frontman Kurt Cobain's or anybody else's: "Kasi hindi ko pinilit eh (I didn't force it). I just let it happen."

Last March, Charice was gearing up for international shows, including Myanmar, the Southeast Asian country where he described the fans as "very nice and sweet." He said, "I haven't been to that country. I don't know how my following is there, [so] I was surprised."

"For me as an artist, when you perform on stage, you give it your everything eh. So when the audience appreciates it, even if they don't know the song, but you feel their emotion, 'yun yung (that is the) best feeling for me."

As he tours the globe, Charice shared his own thoughts about what a "global Filipino" means, for someone like him who has been recognized abroad and by figures like Oprah Winfrey and hit-maker David Foster, his own mentor. (READ: David Foster on Charice, Filipino talent, and star-studded PH concert)

He told the magazine that it goes more than global recognition: "Para sa akin, ang (for me, the) global Pinoy, kahit saan ka magpunta alam mo sa sarili mo [na] mahal mo ang pagka-Pilipino mo at proud kang dalhin 'yon kahit saan (wherever you go, you know yourself (you know that you love being Filipino and are proud of bringing it anywhere)."

Touring may have been tough for Charice, but he draws "comfort and sanity" from his girlfriend of 3 years, Alyssa Quijano. "When she's there, I'm already awkward. If she's not there, I'm more awkward," he confessed.

Mega Man asked Charice what it admitted to be a "clichéd" question: "What's the secret to your success?"

The pop singer responded with no frills, yet left a sincere nugget of wisdom contextualized by his own experience: "Just be yourself. 'Yan ang pinakamahirap gawin (That's the toughest to do)." – Rappler.com