PARIS, France – Emily Blunt was more than a little nervous about stepping into Julie Andrews' laced-up boots when all the world knows her Mary Poppins was supercalifragilisticexpialidocious.

But just like the miracle-working nanny, the British actress who takes up Poppins' talking umbrella in the new Disney sequel to the children's classic, comes equipped with an unwavering stiff upper lip.

"I was a bit trepidatious," Blunt told AFP, using a word that might have escaped from a Poppins' song.

So much so that she tried to put Andrews' Oscar-winning 1965 performance out of her mind entirely by refusing to watch the original film.

"I had seen it as a child, so I do have a pretty lasting memory of the impact it had on me – how spellbinding and beautiful it was," said the actress who went to the same upper-crust English boarding school as Princess Sarah Zeid of Jordan.

"But I decided not to rewatch it so as not to get intimidated and too influenced by what Julie did. I just thought, 'If I'm going to play Mary Poppins, I've got to play my version of her. Otherwise, there's no point doing it'," she said. 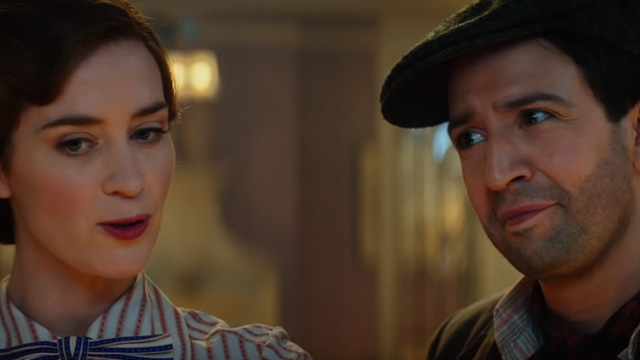 TEAM UP. Emily Blunt is joined by Lin-Manuel Miranda in the movie.

"After reading the books I found her so delicious to play because she is so mysterious as well," said Blunt, who is best known for The Devil Wears Prada and Salmon Fishing in the Yemen.

"Mary Poppins doesn't reveal her inner workings to anybody. She doesn't want to," said the actress, who ramps up the nanny's buttoned-down Britishness in the new film, Mary Poppins Returns, which is set in the 1930s, two decades after the original. (WATCH: Emily Blunt is the iconic nanny in ‘Mary Poppins Returns’ teaser trailer)

For Blunt, Poppins is not only "superhuman" and super-capable but also full of contradictions - kind yet aloof, strict and yet free-spirted, she is "an adrenalin junkie going into all these adventures. She loves it".

But you also see "these private moments of compassion and empathy and where you see just a little crack in the armour of her stern" rather prim exterior, Blunt said.

Blunt believes Poppins is a mystery wrapped in an enigma who lets people believe that she is some kind of distressed gentlewoman to "keep everyone guessing".

The actress, who had a stutter as a child, made her breakthrough in the acclaimed British indie movie My Summer of Love by the Oscar-winning Polish-born director Pawel Pawlikowski.

Her own personal Mary Poppins was a school teacher who helped her overcome the impediment. The magic worked so well that she made her stage debut in London's West End opposite Dame Judi Dench at 18. 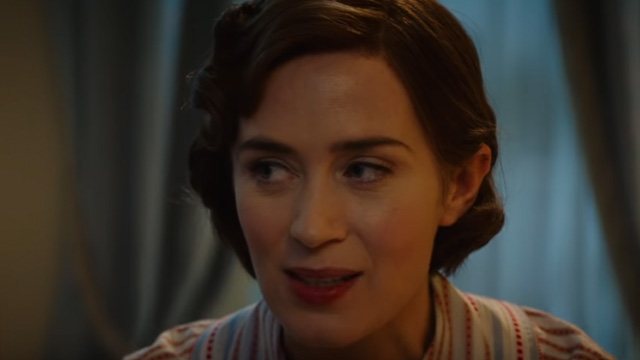 SHE'S BACK. Mary Poppins returns to help and cheer a new generation of children.

Since then she has scaled the heights of Hollywood, co-starring in blockbusters like Edge of Tomorrow with Tom Cruise and comedies such as The Five-Year Engagement.

But even action thrillers like Sicario never prepared her for the stunts she had to do as Mary Poppins.

Director Rob Marshall said he wanted Mary Poppins to really drop out of the sky and fly away again at the end of the film with her umbrella.

"I didn't want it to be some green screen movie," he told AFP. "Emily Blunt really flies out of the sky, that's her!

"We did that on location, she was up there, 50 feet (15 metres) in the air. She was terrified. But I wanted to do it as real as possible. Because I think you can feel it when it is phoney. I wanted to create a real world where magic is brought into it," he added.

Blunt admitted that she was "not amazing with heights and it was one of those things where they winch you up there and you just think it is going to go on forever," she said.

Marshall said Blunt was his "first and only choice" to play Poppins in his film, which is released in Europe and North America next week. "I honestly feel she's the only person on the planet that can play the part. She's so warm, accessible, but also she's smart and she can sing and dance, and she's British. There was no one else for me. –  Rappler.com