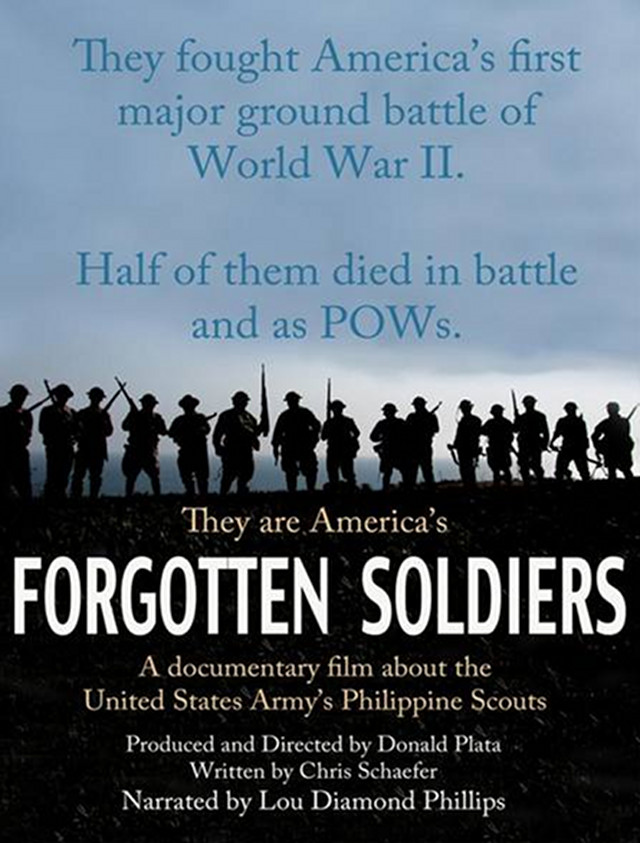 BETTER LATE THAN TOO LATE. u2018Forgotten Soldiersu2019 is a 7-decades-hence documentary about the heroic Filipino fighters in the Battle of Bataan.

All images courtesy of the Ortigas Foundation Library

MANILA, Philippines - There is a tone of toughness to the name of the Philippine peninsula that is Bataan. Even the province’s shape, a prominent silhouette jutting out into the Manila and Subic Bays and the South China Sea off southwest Luzon, suggests a proud, even defiant stance amid the massive ocean around it.

Such traits all the more come to mind while viewing “Forgotten Soldiers,” a documentary of some 90 minutes that sheds light on events that resulted in our perpetual, now 71-year observance of April 9 as Araw ng Kagitingan (Day of Bravery).

Specifically, the movie chronicles the heroic yet little-known Battle of Bataan, which enlisted thousands of members of the Philippine Scouts, a locally organized, Filipino contingent of the US Army that fought alongside American soldiers against the invading Japanese troops.

“Forgotten Soldiers” is a labor of love by Filipino-American Donald Plata, a professional aviator and nephew of a Philippine Scout, who spent 6 years of his life and much of his own money to produce, direct, and edit this little-seen documentary.

Written by “Bataan Diary” author Chris Schaefer, the film features respectful, subdued narration by Fil-Am Lou Diamond Phillips — the “La Bamba” star, son of a former US Navy officer and his Filipina wife, and staunch advocate of HR 4574, aka the Filipino Veterans Equity Act of 2006.

Through a combination of invaluable archival footage, priceless vintage photographs, and episodic, modern-day dramatizations — along with interviews with a few surviving, US-based Philippine Scouts — “Forgotten Soldiers” trains a long-deserved spotlight on the early-1940s exploits of the Scouts, efforts that not only managed to hold off Japan’s capture of the World War II strongholds that were Bataan and Corregidor but also aided heavily in derailing the larger, beyond-Asia ambitions of the imperial colonizers. 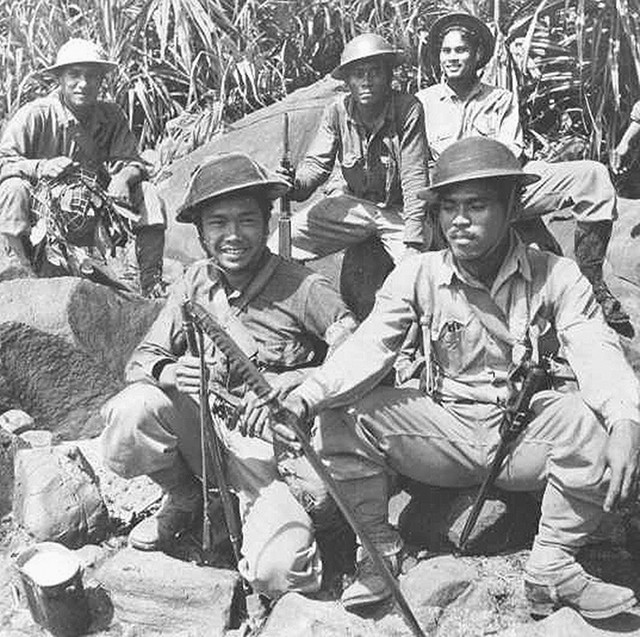 One thing that stands out in “Forgotten Soldiers” is the historical revelation that it actually took months — between Japan’s December 7, 1941, bombing of Pearl Harbor and, among others, US Air Force-occupied Clark Field in Pampanga — before the post-Good Friday takeover of Bataan by forces from the Land of the Rising Sun.

Specifically, the documentary provides a chronological outline of what the Japanese army had not foreseen: a grueling, practically inch-by-inch occupation of Luzon, thanks to the delaying efforts of the Scouts and their States-hailing co-defenders.

All told, despite their limited military training vis-à-vis their US allies, as well as dwindling weaponry and food, the Philippine Scouts are shown as having fought the warmongering invaders to the hilt, resulting in a substantial enough decimation of Japanese soldiers that called for their own reinforcements from already-seized lands such as Singapore.

Within the “Forgotten Soldiers’” big picture, Plata and Schaefer manage to cite minute but notable trivia (e.g., this venture with the Philippine Scouts was the last ever horse-mounted cavalry in US military history) and get to present a few smaller, poignant stories.

One such tale is told by interviewee and 26th Cavalry Scout Felipe Fernandez through a touching memory of his assigned steed “Mike,” one of many reliable war horses that ended up willfully slaughtered to provide the troops with makeshift sustenance. Another is the US Congressional Medal of Honor-meriting boldness of the late Sgt. Jose Calugas, who at least once defied a hail of enemy gunfire to retrieve usable artillery.

Apart from the courage under overwhelming fire of the Philippine Scouts (who are not to be confused with boy scouts), “Forgotten Soldiers” inevitably details the harrowing ordeal our fighting countrymen underwent and, for a fortunate lot, lived through. 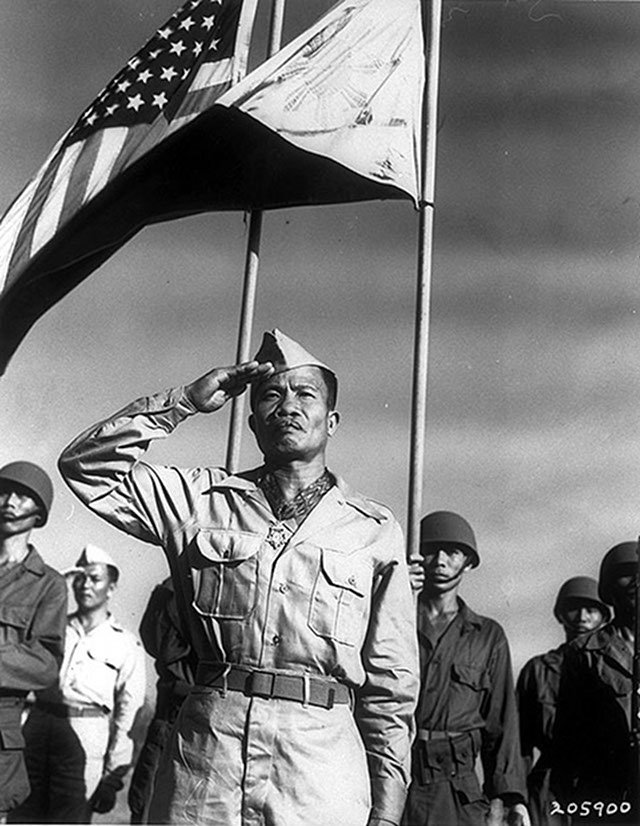 From having to battle it out with a militarily superior foe under the harsh, arid conditions of our tropical terrain, to the eventual onset of diseases such as malaria and dysentery, down to merciless, fatal mistreatment by the Japanese military before, during, and after the infamous, 65-mile Bataan Death March, the thousands of Pinoy Scouts and US soldiers (said to be at least 80,000 in all) experienced humongous and abominable suffering, not to mention being parted from their distraught families. (That many of the Scouts were youthful 20-somethings also incidentally reinforced the “bata” in “Bataan.”)

Along the way, “Forgotten Soldiers” suggests that, for all the horrific conditions they were going through, suicide was apparently never an option for the Scouts, unlike for the Japanese soldiers, some of whom are mentioned and shown as opting to leap to their deaths off a cliff in lieu of surrender after an ill-fated advance prior to seizing Bataan.

While the now not-so-forgotten tale of “Forgotten Soldiers” shines a light on a shameful, war-plagued chapter in world history, the bigger shame would be if this straightforward movie would remain unviewed by today’s and future generations — we who take the bitter, harrowing past for granted amid the relative freedoms and easy luxuries of the present. (The film has had a limited number of screenings in the US and locally since its January 2012 premiere at the World War II Museum in New Orleans.)

The trailer for ‘Forgotten Soldiers’ can be viewed here.

The unlikelihood of “Forgotten Soldiers” getting a mall-theater screening aside, there must be a way for public institutions — not just schools and universities — to host showings of this informative film, the local custody of which resides with the Ortigas Foundation Library.

That way, as Ortigas Foundation Inc. executive director John L. Silva put it prior to their latest, free-admission screening of the movie, the greater public would be better-informed about the events of the Battle of Bataan and perhaps be inspired to do appreciative visits of the likes of the American Military Cemetery, a memorial for the thousands of underappreciated souls — many of them unidentified — who sacrificed their very lives during the last World War. (I would add that more viewings of the film would help foster eye-opening discussions such as this.)

In other words, thanks in part to “Forgotten Soldiers,” the Philippine Scouts ought to be remembered more as soldiers than as forgotten. - Rappler.com

Parties interested to watch ‘Forgotten Soldiers’ or perhaps to show it to the televiewing public can coordinate with the Ortigas Foundation Library. Their address: 2/F Ortigas Building, Ortigas corner Meralco Avenues, Pasig City. They can be reached via 631-1231, ortigasfoundation@ortigas.com.ph, or www.facebook.com/Ortigas.Foundation.