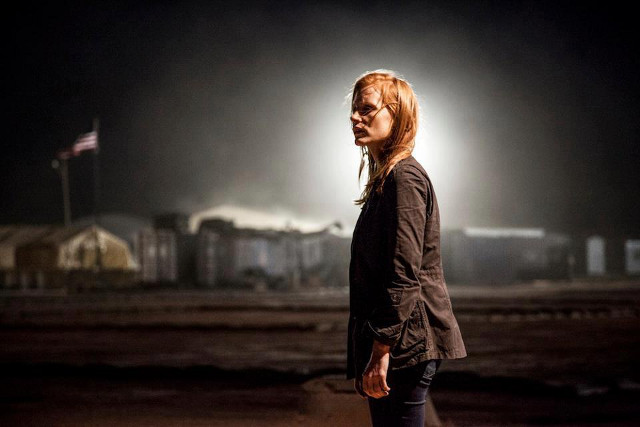 INSTRUMENTAL WOMAN. Jessica Chastain in 'Zero Dark Thiry' for which she won Best Actress in a Motion Picture - Drama in the 70th Golden Globes.

MANILA, Philippines - The old hat is that we turn to entertainment — books, movies, TV — to escape from the real world.

But over the past decade, the real world has encroached upon entertainment in a way that it hasn’t since the Second World War.

And while the US entertainment industry hasn’t become the outright propaganda machine that it was during WWII, it has still turned into the ideological battleground in the so-called War on Terror.

Much more than dailies, magazines, 24-hour news channels, and the Internet, it’s in the cineplexes and television screens where one gets a feel for the American political zeitgeist.

In the years following 9/11 for example, there was a surge in TV programs highlighting the supposed inner workings of both the armed forces and intelligence operations ("The Agency" and "E-Ring"). There was also an upsurge in police procedurals such as "CSI: Crime Scene Investigation" (and its many spin-offs) — programs that highlighted the triumph of rationality and science over the most random acts of violence.

These were, and remain to be, comforting fictions in the age of terrorism. In fact, the highest rated show in the US today, "NCIS: Naval Criminal Investigative Service," is a procedural set within the armed forces.

But perhaps no TV show can encapsulate the past decade in US entertainment better than the spy thriller "24," which premiered weeks after September 2001. "24" — so-called because each episode is told in real-time, and each season of the show is a day in the life of the characters — drew controversy because it regularly featured scenes where its protagonist, Jack Bauer, employed torture to coerce enemy agents into helping him or giving up information.

Though fictional, some took the show’s use of torture as a means of information gathering as evidence of its efficacy. In a later season, particularly the one that aired after President Barack Obama took office and publicly declared that the US will cease using torture, the show put its protagonist on trial for war crimes and human rights abuses, but then effectively absolved him of the charges when, once again, his torture methods helps save the day.

Then, of course, there is "Homeland," which won awards at the recent Golden Globes; a show that is heavily informed by the 9/11 attacks and its aftermath, it even features footage of it in its title sequence.

While US television has been commercially successful in its use of the War on Terror as material for entertainment, the opposite is true for cinema. Movies such as "Stop-Loss," "Grace is Gone," "The Messenger," and "The Hurt Locker," while garnering critical notice (including Academy Awards for the latter), have not performed as well in the box-office.

One might attribute this to the fact that television is mostly free, while people have to pay to get into movies. And people would rather pay money to see robots from other space duking it out in some nondescript metropolis than be reminded of what is happening out there.

But I think it’s more to do with the confrontational way filmmakers have approached the subject: be it the domestic cost of the War on the soldiers fighting it; the brutal conditions soldiers face in country; or the very events on that September day 12 years ago (and I am referring to Paul Greengrass’ cinema verite approach to "United 93," a film that I cannot stand to watch again, though I eagerly recommend to everyone go and watch it).

"Zero Dark Thirty," which is showing in Philippine cinemas, is billed as an action thriller about “The Greatest Manhunt in History.” And it is both action-packed and thrilling. But it also shares its many predecessors' confrontational approach in talking about the War on Terror.

The movie, directed by Kathryn Bigelow and written by former journalist Mark Boal, follows the decade-long manhunt and eventual killing of Osama Bin Laden, Al-Qaeda leader and the mastermind behind the attacks of September 11. Bigelow and Boal are no strangers to making movies about the War on Terror, having collaborated previously on "The Hurt Locker."

But unlike their previous collaboration, which was a work of fiction, "Zero Dark Thirty" is based on facts. In fact, the movie hews close enough to the true events surrounding the hunt for Bin Laden that American lawmakers have called for an investigation on how Boal and Bigelow were able to find out details about the operation that were kept off the presses.

One of the things that Bigelow and Boal discovered was that a lone female CIA operative was instrumental in finding where the elusive terrorist leader was hiding. It is through the eyes of this operative, played by "The Help’s" Jessica Chastain, that the decade-long story unfolds. She’s no Sydney Bristow or Carrie Mathison, but she gets the job done, eventually.

The movie has also garnered criticism for its portrayal of torture as a means of intelligence-gathering, with many saying that the film implies that torture uncovered the information that gave up Bin Laden, thus advocating its use. These scenes come early in the movie and are challenging to viewers, even those familiar with Jack Bauer’s many methods of coercion on "24."

"Zero Dark Thirty," while a fictionalized account, feels almost like a documentary, especially during the climactic raid in Pakistan that ends the manhunt. It’s this approach by Bigelow that I think will unsettle many viewers.

In fact, anyone coming in to the movie hoping to see gunfire and explosions left and right will be sorely disappointed. And not because there aren’t gunfire and explosions, there’s a lot of that in this movie. It’s just that when they do happen, the viewer feels the real-life costs of those scenes, on both sides.

Late last year, the HBO show "The Newsroom" had an episode set on the night that Americans were told that Osama Bin Laden had been killed. In the episode, the moment is welcomed by the show's characters as a moment of triumph.

In "Zero Dark Thirty," the closest thing you have to that scene is a soldier screaming out loud after they come home safely from the raid, just before he begins sorting out hard drives, DVD, and files which will be used to look for more targets to kill.

Meanwhile, in the background, the corpse of former Enemy Number One stiffens and grows cold. - Rappler.com

(Have you seen "Zero Dark Thirty"? What do you think of it? We want to know. Email us your 3- to 5-sentence review together with your full name and occupation to desk@rappler.com. Use the subject heading POOLED REVIEWS: ZERO DARK THIRTY.)