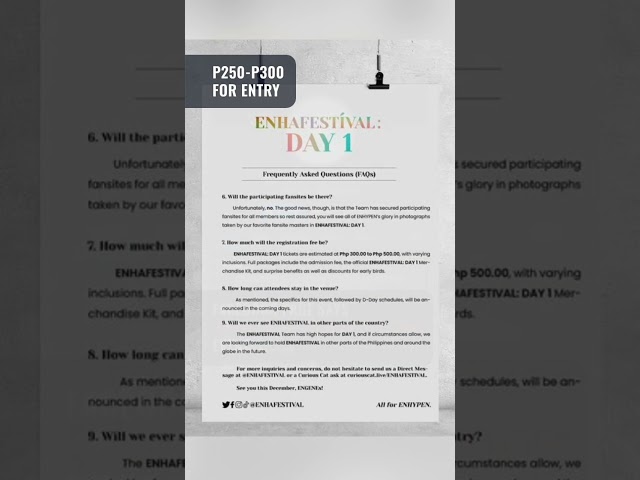 Facebook Twitter Copy URL
Copied
The agency says they will take legal actions if the organizers of 'ENHAFESTIVAL: Day 1' will push through with the event

MANILA, Philippines – Belift Lab, agency of K-pop boy group ENHYPEN, issued a warning against an unauthorized paid fan event that will be held in the Philippines.

In an email notice issued on Thursday, January 5, Belift Lab announced that the upcoming event “sold tickets by using the content of BELIFT LAB without our authorization.”

“We advise you not to get adversely affected by the event,” they said.

The event, titled “ENHAFESTIVAL: DAY 1,” will be held on January 7 at the Avida Towers Centera Clubhouse. According to its Facebook page, it is an “ENHYPEN OT7 Photo Exhibition” event.

Belift Lab emphasized that the event host did not hold any discussion with their company and that they will “assume no responsibility to any damage resulting from the event.”

The company added that if the host pushes through with the event, they will take legal action for infringement of intellectual property.

As of writing, the organizers of “ENHAFESTIVAL: DAY 1” have yet to release a statement.

The group is known for their hit tracks “Polaroid Love,” “FEVER,” and “Drunk-Dazed.” They are set to hold a three-night concert in Manila on February 3 to 5 at the Mall of Asia Arena. – Rappler.com