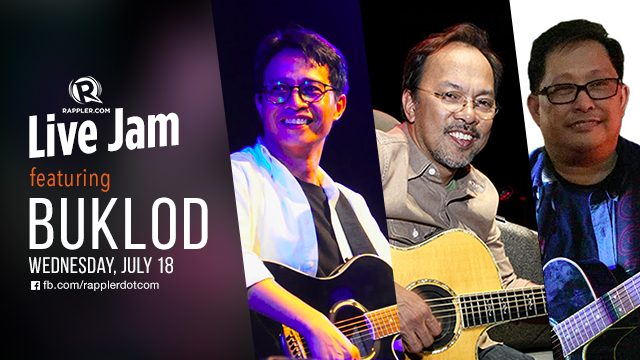 Buklod is performing on Rappler Live Jam, 3 decades after they first started performing at political events.

The band was born in the 1980s at the height of the anti-Marcos struggle. Members Noel Cabangon, Rom Dongeto, and Rene Boncocan each had their own musical endeavors, but they banded together to form Buklod, which stands for Bukluran ng Musikero para sa Bayan.

Together with other cultural workers, they raised their voices against the Ferdinand Marcos’ government. They continued to sing about the social problems that persisted in the wake of Marcos’ removal, with songs that centerd on the lives, struggles, and aspirations of Filipino peasants.

They released their first album, Bukid at Buhay, in 1988, before Boncocan left the group. The remaining members then released their second album, Tatsulok, in 1991, whose carrier single gained popularity in the 2000s due to a cover by pop rock band Bamboo.

In 1992, Buklod again released another album, Sa Kandungan Ng Kalikasan, which carried the hit, “Kanlungan,” a love song to the environment which has since become one of the most enduring OPM songs.

Cabangon then continued to pursue his music career as Dongeto and Boncocan veered to other paths, the former ending up as executive director of the Philippine Legislators’ Committee on Population and Development (PLCPD), and the latter, a successful creative manager in a foreign company in Makati City.

In 2017, the trio came together again and started performing again in mass rallies, and are coming up with a new album.

Listen to Buklod as they share their story and music on Rappler Live Jam. Here’s their set list!