One night with ‘Heneral Luna’ Facebook Twitter Copy URL
Copied
'As an actor, ayoko ma-stuck sa isang role. [But] I am a citizen of the Philippines before an actor,' says John Arcilla on his role as Antonio Luna

MANILA, Philippines – Heneral Luna sparked intense discussion about the eponymous hero and his role in Philippine history. The success of the film has been well-documented, from the struggle to bring the story to the screen to the social media response and even its box office earnings. (READ: ‘Heneral Luna’ Review: Essential viewing)

Naturally the spotlight has turned to its cast and crew, from lead actor John Arcilla and director Jerrold Tarog, to producers Fernando Ortigas and EA Rocha. Why did they make this movie? What are they trying to tell audiences? Are they trying to start a revolution or simply stirring up a hornet’s nest?

Adobo Magazine, Seven a.d. and Pabrika recently invited Arcilla to give a talk to the advertising community, with Ortigas, Rocha and Vicente “Ting” Nebrida in tow for the Q&A. Inevitably the requisite Spanish curse words and memorable quotes from the film were uttered, but so too were many thoughts on various national issues.

In his talk, Arcilla related the responses of people who had seen the film. Young people told him, “Sir John, thank you so much. Minahal po namin ulit ang bayan (We loved the country again).” Some said, “What have I really contributed to this country? Ang tagal na palang nangyayari noon, isang daang taon na (It happened so long ago, it’s been 100 years). And I was just complaining about what’s happening to our country. Now I really feel so guilty.”

Mothers came up to him and said, “When your 13-year-old kid comes home, raving about a Filipino film, something is going on. Something special is happening.”

Arcilla shared his joy upon seeing children dress up as characters from the movie at Halloween. “I saw pictures of kids going trick-or-treating dressed up as Heneral Luna. I posted on my [Facebook] wall, ‘Dracula and Frankie, eat your heart out. We have new favorites now.’”

He admitted that he was surprised at how often people quoted lines from the movie. “Hindi ko inaasahan na yung mga simple at ginawa ko’ng mga salita ay magiging suddenly hugot line (I didn’t expect that the simple things that I did and the words that I said would suddenly evoke deep emotions in people).”

As he shared the quotes that appeared in memes and conversations, he mused, “Ano kaya ang sinasabi ng heneral habang binabaril siya (What would the general say while he was being shot at)?”

John Arcilla also spoke about Heneral Luna‘s successat the movie’s thanksgiving party. Hear what he had to say below:

As he lay dying

Wearing his Heneral Luna costume, Arcilla launched into a supposition of Luna’s dying words. Throughout the speech, he oscillated between personas. As Arcilla the actor, he was mellow, and pensive. As Antonio Luna, he was angry, frustrated, and fed up. The monologue bemoaned criticisms of Luna’s actions, lamented the state of the nation, and scolded its fragmented people. As Arcilla the actor, he shared, “Hindi ko alam kung narinig ng heneral ang kanyang sarili nung sinabi niyang, ‘Kailangan ba tayong mag-away-away lagi at hindi magdayalogo.’” (READ: John Arcilla on bringing ‘Heneral Luna’ to life)

(I don’t know if the general heard himself when he said ‘We need to fight all the time and not have dialogue.)

In the open forum that followed, Arcilla had much to say that expounded on the sentiments expressed by his character. He shared how much he identified with Luna, especially when it came to aid from other countries. In the film, Luna resists the offer of aid from the Americans in the fight against the Spaniards. But Arcilla argued that there was nothing wrong with foreign aid – as long as debts were paid.

(A country should be helped if it’s struggling. If we’re really still backward becasue we’re an agricultural country, then we should accept it. But we should accept that we have a responsibility to pay, and not put in our pockets the money that we can use to pay.)

Arcilla has already accepted for many people, he will always be Heneral Luna. But if that persona is what people need, he is willing to perform. “As an actor, ayoko ma-stuck sa isang role (I don’t want to be stuck in one role). [But] I am a citizen of the Philippines before an actor. So if I need to do this every now and then, and to speak to a lot of people, different groups, different sectors, I will, ’til we reach whatever we need to reach as a progressive nation. And that’s my role as a Filipino.

“The people provided me with a space to play on. I want to grab that opportunity if that will help us as people of this country. Kung kailangan i-push ito hanggang sa paglampas ng elections, maramdaman lang nila yung pagiging makabayan nila, para tama ang mapili, bakit hindi (If this needs to be pushed past the elections, they’ll just feel their patriotism, so they’ll choose right, why not)?”

Why make this movie?

The producers talked about the risks they took in making the film. Historical films are particularly problematic, and sometimes have a poor track record when it comes to box office sales. But they shared their motivations for Heneral Luna. (READ: 10 movies featuring PH national heroes)

For Rocha, it was a family affair. “My grandparents knew the Lunas. According to my grandfather, one of the greatest tragedies of our history is the assassination of Antonio Luna. That stuck to me. This guy, he’s a perfect anti-hero. He is flawed, and he’s not a victim. He was the closest to a Shakespearean tragedy we could find in this country, among our heroes.

“So why Luna? Because he epitomized the best and the worst of our country, of our soul. I don’t want to write a movie where audiences will say, ‘When is he going to die already?’ I didn’t want to have a victim. I wanted you to identify with him, to root for him, in spite of the wrong choices he made.”

It was Ortigas’ lifelong dream to make a movie. He joked, “This was my first movie, and I didn’t know any better.” Turning serious, he continued, “It was the script. I was impressed with was the train sequence. I laughed my head off. I thought to myself, ‘If I have to produce this movie just to see the train sequence, I will.’”

Ortigas admitted that it was a big risk, but it was something he was compelled to do. “With movies, you never know if it’s going to be a success or not. It was just something I really wanted to do. For my first movie, I wanted it to be something significant.” (WATCH: After ‘Heneral Luna,’ a movie on Gregorio del Pilar is in the works, Paulo Avelino to star)

Luna is the anti-hero, but who is the villain of the story? Some say it is businessman Felipe Buencamino, played by Nonie Buencamino. But Rocha disagreed. “I don’t find him a villain. Why do we put people in that category? Listen to what he says. He’s proposing things in a very sane and logical way. And of course he has interests. How many people are businessmen here? Look at the situation. They all have their motivations. [Buencamino] was not a caricature, he had character. Notice how repulsed he was by the way Luna was murdered. He’s not a bad guy. Maybe bad choices, but not a bad guy.”

Arcilla shared a story about the actor, who was actually playing his great-grand-uncle. “When the role was offered to him, he tried to talk to his grandfather. And the grandfather said no. Nonie thought na ayaw ng family, that he’s going to ruin their name. But the grandfather said, ‘Nahihiya ako sa ginawa ng tiyuhin ko (I’m ashamed of what my uncle did)! ’ And he realized, ‘Well, hindi naman pala ako ni-re-reprimand ng family ko (my family didn’t reprimand me anyway).’ So he just did it as an actor.”

Nebrida shared the challenges and strategies involved in bringing Heneral Luna to audiences. They planned the release date carefully. Some of the cast and crew embarked on a 35-school tour with DAKILA. They held word-of-mouth screenings locally and abroad. “Still we opened very, very soft. One of the things that worked for us was the genius of Nando (Ortigas), who offered a 50% student discount, which was unprecedented.”

Because of weak sales, the film was pulled from some theaters. “That first week we lost more than half [our theaters]. We ended up with 40 theaters, after 100 screens on opening day. But it reversed because of the outcry of the public. Every day people would say, ‘Better watch it na (already) because tomorrow it’s probably gonna be gone.’ The public took ownership of the film. That was what worked in our favor. It was out of our hands already when they were doing these funny memes. It was unbelievable, wala na kami dun (that wasn’t us anymore). It was out of our control.”

Nebrida shares, “There was applause constantly. It had a life of its own. None of it would have been possible if the film weren’t this good, this effective. What we did, it worked because the film was there.” 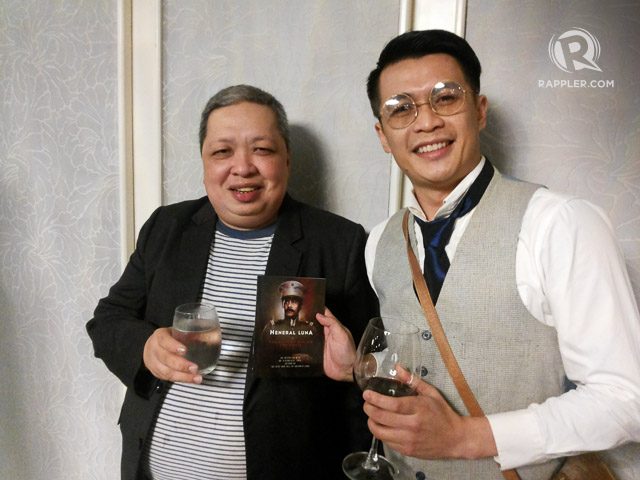 Considering the film’s success, what did the producers hope to impress upon audiences? Rocha said, “What I want them to remember is this is a little film, with great ambition and great style and great heart, that crossed over to the public, and showed a lot of what our nation is, what we are made of. At the same time we hope that theaters now will be more open to indie films, that other producers will step out of the woodwork, and have the balls to come out and make a statement.”

Ortigas hoped audiences would ponder the questions posed by the film. “When I finished reading the script, the first thing that came to my mind is why are we killing our own heroes? I don’t want to compare, but 30 years ago was 1986. Something awakened us then. I hope it won’t take another 30 years for us to make something happen. I was here for the 1986 revolution, and I was very proud to be a Filipino. Thirty years later, what happened? We all want something better. How to pull all of us together, that’s the question.”

Nebrida wanted Filipinos to dream again. “For me, the most meaningful part of the film, which always gets me misty-eyed, is when Joven reads the poem with the Heneral Luna. The line in English goes, ‘If progress is a dream, then dream we must until we die.’ That’s so meaningful on so many levels. I think we should dream on and not just dream but actually do, do things for our country.

“Because this film really brings your hopes alive again. You keep dreaming again, you keep hoping again. And I think that’s what I want to happen, for all of us, for us to keep doing something for our country. Just to do positive things for ourselves and our country. On a bigger note, it makes a lot of people reflect on the candidates that we’re gonna be electing soon.”

Though the film is no longer available in local theaters, it is still showing in North America. Plans for a DVD release are in the works, so that more audiences can witness the anarchy and heroism of Heneral Luna. – Rappler.com