Facebook Twitter Copy URL
Copied
'It is this tenacious refusal to surrender to absolute escape and fantasy that separates 'One More Chance' and to a greater degree, 'A Second Chance,' from all the rest,' writes movie reviewer Oggs Cruz

At its very core, Cathy Garcia-Molina’s A Second Chance retains a very stubborn allegiance to love. In the midst of its damning portrayal of a marriage that is crumbling under the weight of heavy expectations, the film still begs its audience to reconsider the value of sweet old love. (READ: Bea Alonzo on Popoy, Basha’s journey in ‘A Second Chance’)

Like the rest of all the romances that have been fed to momentarily appease the public’s disappointment with real life, it treats love as an elixir for all of life’s conflicts.

In a way, the film isn’t really new. It is as old-fashioned as every oft-repeated fairy tale ever told.

Except that it also feels new. The anticipated sequel to One More Chance digs deeper by candidly exposing the glaringly fragile marriage of Popoy and Basha (John Lloyd Cruz and Bea Alonzo, respectively). Their flawed relationship that survived and won despite the intense pangs of a famously hurtful breakup became an anthem for many hopeless romantics everywhere.

The film opens with the happily-ever-after that was expected out of the conclusion of One More Chance. Popoy and Basha tie the knot in a not-so-modest ceremony that is expected out of fairly successful young professionals. The introduction, which is cleverly played out as the type of overly sentimental video that is usually presented in the middle of middle-class wedding receptions, raises high hopes for the beloved couple. 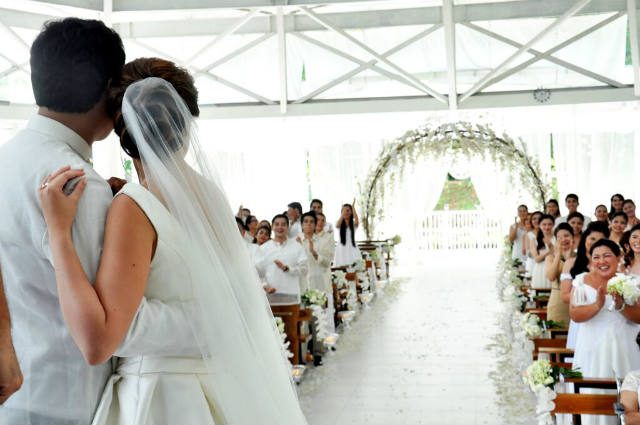 The introduction’s pomp and circumstance summarizes the type of aspirational marriage that most couples end up having after quite a celebration that publicly depicted their love story as triumphant. High with love, Popoy, an engineer, decides to reject an offer to work abroad to build a construction firm with his new wife, an architect. (READ: ‘One More Chance’ sequel ‘A Second Chance’: 7 heartbreaking lines) Their firm initially does well, until marital politics get in the way with Popoy overshadowing Basha, leading to both the business and their domestic life to fall apart.

It is quite rare for commercial romantic films to comprehend middle class aches and sensibilities, considering that because of escapist aims of most consumer cinema, they usually shy away from mirroring real life troubles.

The primary capital of One More Chance however is its ability to turn its pragmatic and sober approach to romance, as opposed to the fantastic and unrealistically idealistic one of a lot of its ilk, into something profitable, perhaps by way of its being able to connect with the communal experience of being hurt by loving too much.

The success of One More Chance therefore allowed Garcia-Molina and writers Vanessa Valdez and Carmi Raymundo to explore Popoy and Basha’s marital woes within a more definite social context, one that has economic failures as a dominant root of domestic conflict, and not narrative contrivances like sudden mistresses or other accidental debacles. The film’s most sympathetic scenes are actually not the ones where the characters dramatically wail and whine about their misfortunes. They are the ones that quietly depict the delicate collapse of all the promises of the introduction’s hopeful wedding, the ones that show Popoy nonchalantly preferring the random noise of his television to the constant nagging of his wife, or the ones that reveal Basha conspicuously checking the price tags of glassware.

A Second Chance has an innate understanding that marriage is never without a social context. The film’s preference in depicting the couple suffering through what essentially is the routinary ebb of married life, although reasonably exaggerated for melodrama’s sake, is telling of the film’s fealty to the ordinary and the familiar.

It is this tenacious refusal to surrender to absolute escape and fantasy that separates One More Chance and to a greater degree, A Second Chance from all the rest.

Despite all that, A Second Chance is still loyal to formula. It still adamantly follows the motions of a standard-issue romance, from beginning to predictable end. At times, the film plays with clichés, such as when Erik Santos’ rendition of “I’ll Never Go”(this represented the sappy sentiment of One More Chance), unceremoniously echoed throughout a lengthy montage that basically has Popoy being emasculated with all his earnest but failed efforts in re-establishing a connection with Basha. However, the film never really abandons the very rationale of its existence, which is to sufficiently entertain.

Thankfully, A Second Chance gives honesty a chance within the business of weaving fables out of the romantic affairs of fictional people. In fact, it is almost a thorough middle-class drama, one that is as sensitive to the unwieldy aspirations of millennial couples as it is to the expectations of its paying audience. Its audacious mix of genre standards with an acute sense of belongingness in this real world of economic ambitions that are almost often betrayed is sincerely rewarding. – Rappler.com

More on A Second Chance: