It is easy to dismiss Paul Greengrass’ Jason Bourne for what it ostensibly is – a propulsive action flick that seemingly doesn’t want to stop, not even for idle conversations.

The film, the fourth in the series involving superhuman spy Jason Bourne and the third that is directed by Greengrass, doesn’t pretend that the film is anything but a showcase of his ability to orchestrate coherence and order out of chaos. That, and Matt Damon’s jolting turn as the stoic but vigorous Bourne struggling from the sobering effects of recovering his long-lost memory.

He starts with a reminder of Bourne’s prowess, throwing the brooding hero in a fight with 3 brawlers whom he topples with astounding ease. Simply put, Greengrass has no time for introductions, no room for lengthy explanations. He wants everything in the film to be part of the constantly kinetic multi-city race towards the goal of resurrecting a franchise that already had its satisfying closure in Ultimatum (2007).

The car chases, the car crashes, the motorcycle stunts, the rapid exchanges of messages and information via cyberspace, even the endless crawls down hallways, corridors, and wide spaces – they are all expertly weaved together to form a singular experience that aims to revive a thirst for non-stop action. The film’s eager assault to the senses works for a while. Greengrass’ jittery camerawork, coupled with his quick cutting style, provokes at first before developing a frenzied rhythm that makes utter sense, given that the film relies predominantly on maintaining a certain level of tension from start to finish.

Unfortunately, the rush gets old and tiring. The rampant chaos, shot understandably with a design that looks as if it weren’t designed, gets woefully repetitive. By the time Damon ends up in another chase amidst a frazzled crowd, the excitement dwindles and the build-up staggers. Jason Bourne ultimately becomes an exercise of replete indulgence. This isn’t to say that Jason Bourne is just thoughtless spectacle.

The film, written by Greengrass and Christopher Rouse, attempts to situate Bourne within scenarios that are contemporary and relevant. He hops from one city to another, establishing a world that is troubled with conflicts and concerns. He is first hunted in the streets and alleyways of Athens beset by anti-austerity riots. The mood in London where he is to be entrapped by his enemies is one of paranoia, with suited office workers instantly disturbed by the sound of sirens. 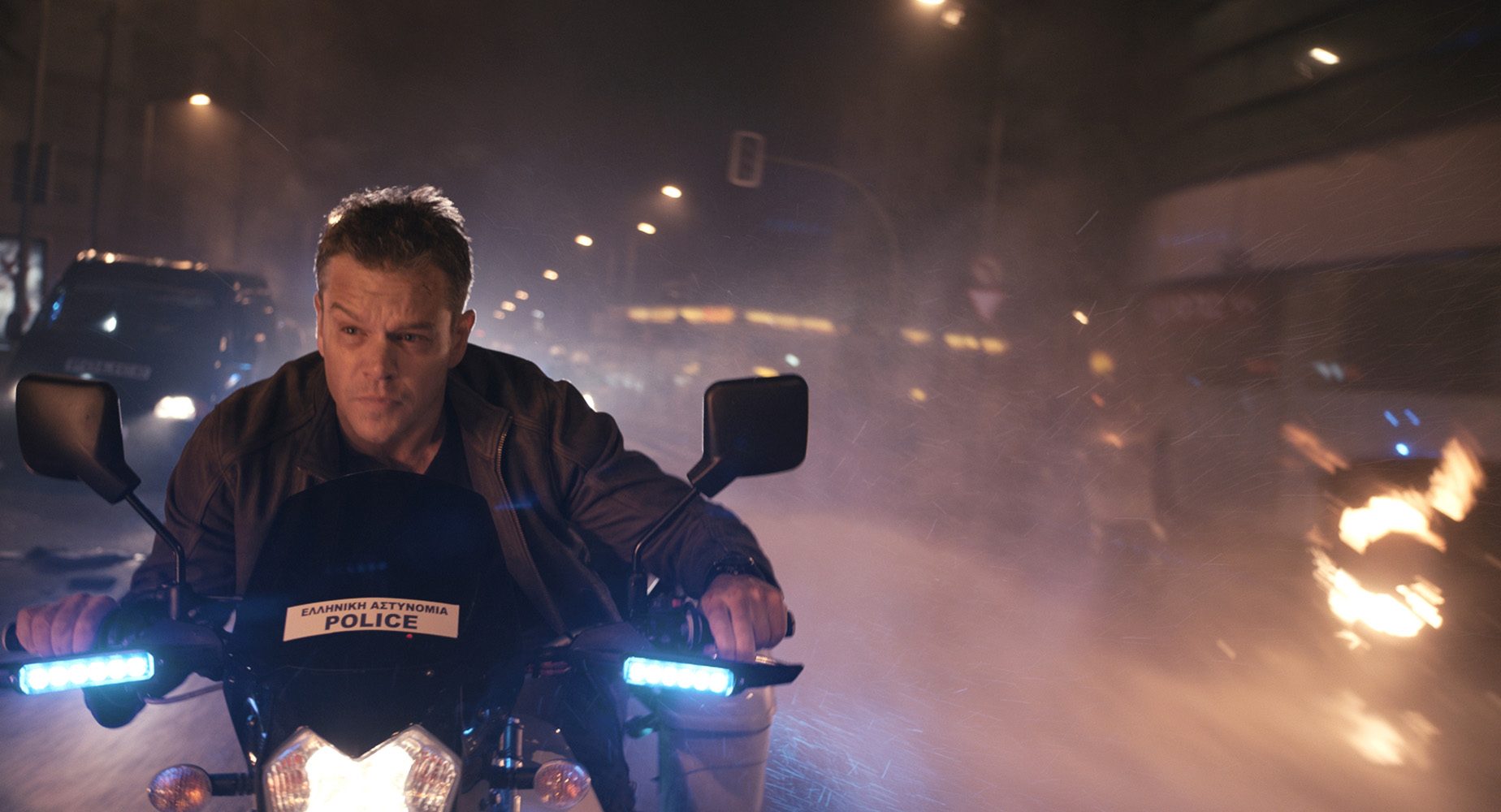 The film doesn’t need to slow down to display its currency. Even as the action keeps propelling forward, Jason Bourne still manages to place itself in a world that is strangely and disquietingly familiar. It certainly helps that a chunk of the narrative seems to be culled from real world dilemmas, and a lot of the characters feel like they were inspired from an odd mix of real people and fictional cut-outs.

Riz Ahmed (Aaron Kalloor) is obviously a token for all the charismatic Facebook-era billionaires. His dilemma of allowing his precious social network to be a platform for government spying alludes to recent headlines about technology firms who are forced to balance their user’s privacy concerns with national security. CIA Director Dewey (Tommy Lee Jones) feels like a standard-issue bureaucrat, a hardened government official whose morals are defined by duty. His enigmatic protégé Heather (Alicia Vikander) is a more refreshing creation, a woman whose motives remain a mystery even when everybody else’s are out in the open. Entertaining even if repetitive

Jason Bourne, despite a title that feels like it will be more character-driven,doesn’t really do anything to turn Bourne into anything other than the rampaging human weapon that all the previous films characterize him to be.

He actually doesn’t say much, just a few words and phrases Damon mutters with the littlest effort possible. The character simply reacts to whatever happens around him. He is the film’s biggest spectacle, the primary mover of all the violence, intrigue and destruction. True, the film remains entertaining even if it gets torturously repetitive, but essentially, Jason Bourne is nothing more than an extension of a series that is more profitable if its main character remains to be a brash stereotype. – Rappler.com