MANILA, Philippines – After winning the Golden Lion award at the Venice Film Festival, Ang Babaeng Humayo (The Woman Who Left), starring Charo Santos and John Lloyd Cruz, will finally be shown in the Philippines starting September 28.

Directed by Lav Diaz, Ang Babaeng Humayo is Charo’s first film after stepping down from her duties as president of ABS-CBN. She currently serves as Chief Content Officer of the TV station and the executive adviser to the chairman. She also runs ABS-CBN University.

Lav’s movie is about Horacia (Charo Santos), a former schoolteacher who is released from prison, where she was kept for a crime she didn’t commit. After returning home, she seeks revenge against the man who framed her, and in the process develops a friendship with Hollanda (John Lloyd Cruz).

Here are some facts about the film. 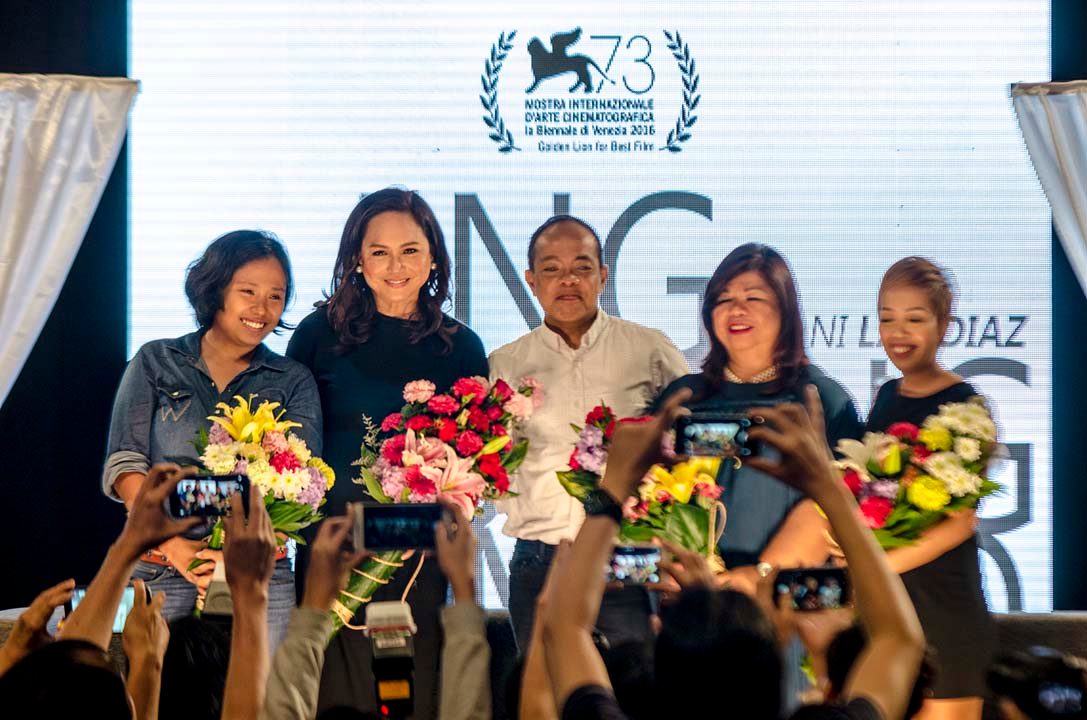 1. Charo Santos-Concio on why she accepted the project. According to Charo, she accepted the film following a conversation with Direk Lav, during a thanksgiving dinner for his film Hele Sa Hiwagang Hapis (A Lullaby to the Sorrowful Mystery).

(I also said this during the press conference when we were in Venice. I want to work with Lav Diaz. I want to understand his cinema, why he makes long-running films… I really appreciate the freeedom he gives to his performers.)

After the press conference, Charo told reporters what she observed about the award-winning filmmaker after working with him.

“His cinema is free. Wala siyang (He has no) boundaries, wala siyang (he has no) rules. He always pushes the edge of the envelope. And he allows you, gives you the space and freedom to interpret your character, the way you see in the context of the narrative,” she said. 2. On location. The film was shot in Calapan, Oriental Mindoro, where Charo is from. On her role as Horacia, Charo said she needed to act very masculine in some of the scenes, and that was a bit challenging.

“I think as a person I’m observant. To begin with I’m observant. And so when you’re acting you forget about yourself. Because it’s not about you, it’s never about you, it’s about the character that you portray. And kung ano yung na oobserve ko, yung ang ginagawa ko (And what I observe, that’s what I do), with a lot of help also from feedback from other people. (Like I spoke to some friends how to act masculine, how to move like a man, where’s their core, where they put their weight on, those kind of things.)

(What was hard for me was that direk Lav doesn’t cut right? His scenes would run for 5 minutes, 10 minutes, so sorry if you’re given a monologue and you have to memorize. You cannot change a word because his writing is very lyrical.)

3. John Lloyd on his role. In the movie, John goes beyond his comfort zone and takes on the role of Hollanda. The Hollywood Reporter describes Hollanda as an “epileptic drag artist.”

In an interview with reporters last September 15, John Lloyd said that beyond the physical transformation, that challenge in doing Hollanda was giving life to the character. (She’s having a hard time seeing her what life lies ahead of her, difficulty on how to move on with life, that one day, everything will be okay and something good will happen. So that’s more difficult to get into than the physical transformation.)

(When I’m in a scene with Charo, I was like wow! I was really happy. Charo and I had a fun experience, because we didn’t know each other, and it was the first day of shooting, so we were teaching each other[…]) Cacai said that she did not know at first that Charo was part of the movie. She even kept asking the producers about who were part of the cast.

(I was having breakfast, we were in a hotel in Mindoro, arriving was Charo Santos, pak!)

(Aside from being starstruck everyday with her… did Mama Mary come down here on earth?)

She also shared that even if Charo was an executive of a company, they never felt it during the time they were shooting. (At first I was shock. Especially with the young ones inside. If I asked them how old they are and they would answer me 24 years old, dear, why are you here? What are you doing here?)

(So there is some sadness, and life stops for them. But again, they choose to see the bright side and say that, ‘but our lives inside here are okay, we eat 3 decent meals a day. Whereas when I was still outside the prison, all I would eat was tomato during Christmas.’ That kind of thing.)

Despite the situation, Charo said that she saw many of the prisoners trying to see the positive from their experiences inside the prison.

“Nakakatuwa kasi may nakukuha kang lakas. May nakukuha kang lakas, and I think that’s what I also brought with me as Horacia, when I went out into the world with a bitter heart, wanting revenge diba? My plight. When I met good people along the way, bumalik yung goodness in all of us.”

(It’s very inspiring and you get strength from it. You get strength and I think that’s what I also brought with me as Horacia, when I went out into the world with a bitter heart, wanting revenge right? My plight. When I met good people along the way, the goodness in all of us came back.) 6. Celebs on the red carpet.  Charo was also asked about her experience during the film festival, where she got to see some of top actors around the world.

(Of course. Up to now I’m still a fan right? I got starstruck with Tom Ford, Sam Mendes[…])

7. Charo and John Lloyd on working with each other. This is also the first project together for John Lloyd and Charo.

Asked how it was working with the ABS-CBN boss, John Lloyd joked: “It’s so difficult to work with her.”

(Ma’am Charo, of course this is the first time I saw her… I know Ma’am Charo, that no matter how nice she is, how down to earth she is, well she’s still the boss. Especially when we’re in our area.)

(But I was amazed because when you work with Lav, especially in a small production, you all know each other, it’s just a few of you. And she was one of us. We ride the same van, we eat the same food, we stay at the same hotel. It’s just nice because my point here is she’s playing a character, she’s playing a role and that was a great help to me because I did not have to break it anymore.) (Because you’ll be effective if your co-actor helps you in the scene. And I did not have a hard time because Ma’am Charo was generous in that sense. We never felt on set that she was “Ma’am Charo” at all.) (John Lloyd is very serious when it comes to his craft. I think he’s a method actor… you can’t talk to him even during lunch break.) “The moment he sits down for his makeup, in character na siya but really he’s in character all the way until the last shooting day,” she said adding that he only becomes John Lloyd again after finishing his scenes.

She added after the presscon: Magaling siya at madaling katrabaho. Yun na nga, seryosong-seryoso artist kung matatawag. Pinang-aaralan niya ang kanyang papel, pinaghahandaan niya. Diba he doesn’t take anything for granted. I also understand that he immersed in some gay bars or something.”

(He’s very good and easy to work with. As i said, he’s a serious artist as we can call it. He studies his role, he prepares for it.)

With the win at Venice, some expressed hopes that the movie would be the one sent as the country’s bet to the Foreign Language movie category in next year’s Academy Awards. The movie Ma’Rosa, which earned Jaclyn Jose a Best Actress award at the Cannes Film Festival, has the honor.

“It’s not within our control. There’s a selection committee and this with the Film Academy of the Philippines.

(As I said, we have different ways of seeing it, different tastes, let’s respect the film they’ve chosen.)

John Lloyd on the other hand said: “We have a good film. I think we have an awesome film for the Oscars para sa best Foreign Language, Ma’ Rosa.

“I mean Ma’ Rosa was stunning, sobrang ganda ng (it was really beautiful) Ma’Rosa and yeah dapat. Congratulations din kay Direk Brillante [Mendoza], to the one and only Ms. Jaclyn Jose, congratulations. I saw it, grabe I’m in awe,” he said.